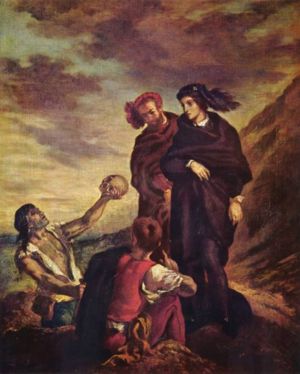 Hamlet and Horatio in the cemetery by Eugène Ferdinand Victor Delacroix; this painting depicts Hamlet holding the skull of Yorick, the king's jester.

Hamlet is a tragic play by William Shakespeare, first published in 1603, and again in an expanded version the following year.[1]

The play depicts young Prince Hamlet of Denmark in the months following his father's death. Troubled by the fact that his mother, Queen Gertrude, has wed his Uncle Claudius so soon after the tragic event, he wrestles with the question of whether his father's death was really the result of a snakebite, as was officially reported.

Then the king's ghost appears to the city guards. When Hamlet is made aware of this, he spends the night at the post, awaiting his father's reappearence. His father's ghost bids him to follow, which Hamlet does, in spite of his comrade's objections, After Hamlet declares that he will go no further, the ghost begins to speak of his murder. His death was not the natural occurrence that was reported: he was poisoned by his own brother, who soon afterwards married Hamlet's mother. The kingly figure asks Hamlet to avenge his tortured soul in purgatory, but not to harm his queen.

In attempt to unmask his uncle's guilt, Hamlet feigns madness. Polonius, the king's counselor and father of Ophelia, who believes Hamlet is in love with her, conspires to spy on Hamlet in order to demonstrate to the king and queen that it was this love that drove him mad. So he asks Ophelia to walk about the hall reading, just as Hamlet was known to do.

Hamlet, depressed from these weary times and unfortunate news, then debated with himself over the question of life and suicide, in one of the most well-known soliloquies of all time (see To be, or not to be). It was then, after he had finished speaking, that Ophelia entered with her book. Polonius, along with the king and queen, spied on the conversation that took place between the two. Hamlet, in fact, showed no affection for the commoner Ophelia, instead insisting that she join a nunnery.

Determined to show the guilt of his uncle, Hamlet wrote a short play exposing the truth of his father's death, depicting the exact details of the murder. Indeed, Claudius could not help exclaiming his guilt, and Hamlet chased after him to avenge his father. However, when Hamlet caught up with him, he was praying, and Hamlet did not believe it to be justice for Claudius to go straight to heaven since he had just confessed his sins to the Lord.

So Hamlet then left to confront his mother for the wicked deeds she had done. He heard a noise yell out from the curtain, and, believing it to be his uncle, stabbed the cloak figure blindly. He later found that it, in fact, was Polonius. Claudius soon thereafter deported Hamlet to England, supposedly to alleviate his insanity, but in truth, to have him murdered.

In dire grief and despair, Ophelia grew mentally ill and drowned in a river. Her brother, Laertes, returned from a trip to France enraged, and Claudius persuaded him that Hamlet was to blame for his sister's death. So when Hamlet unexpectedly returned, Laertes challenged him to a fencing match. However, Laertes and Claudius plotted to kill Hamlet by means of a sharpened fencing sword dabbled in poison, and, if necessary, by means of a poisoned challis. During the match, queen Gertrude drank of the poisoned wine, thus resulting in her death. Hamlet, however, had already been cut by the poisoned sword. Before he was affected by the venom, however, he cut Laertes with his own sword. In Laertes' last moments of life, he revealed the plot to kill Hamlet. As Hamlet began to succumb to the poison, he avenged his father, then lied down speaking his famous last words, "O, I die, Horatio; the potent poison quite o'er-crows my spirit: I cannot live to hear the news from England; but I do prophesy the election lights on Fortinbras: he has my dying voice; so tell him, with the occurrents, more and less, which have solicited. The rest is silence."