This article is about the GNU operating system. For other uses of the term GNU, please see GNU (disambiguation). 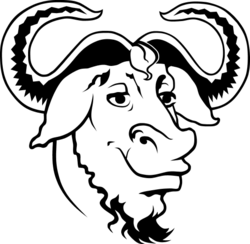 GNU is a free operating system modeled after AT&T's UNIX, originally announced by Dr. Richard Stallman on September 27th, 1983 on the net.unix-wizards newsgroup.[1] It is not the name of any one program, but the collective group of all the utilities required to provide the user a fully-functional operating environment, such as the GCC compiler for the C programming language (in which most of GNU is implemented), the Bash command shell interpreter, the Emacs text editor, and the GNOME desktop environment.

The acronym GNU is recursive. It stands for "GNU is not Unix" and is intended to be a play on words. Richard Stallman is an accomplished programmer and hacker himself; this wordplay in GNU's naming fits his personality perfectly.

The GNU project is currently maintained by the Free Software Foundation.