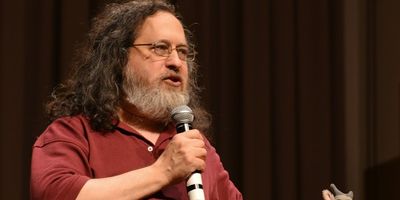 Richard Stallman during a 2011 talk he gave for the University of Pennsylvania Computer Science department.

Richard Stallman (1953 - ?) is a software engineer who founded the GNU project and the Free Software Foundation. Stallman has spent much of his life as a tireless campaigner against proprietary software and software patents and what he views as the excessive encumbrances of copyright. He is also known as the developer of the free text editor Emacs used in Linux and Unix operating systems.

Stallman is a 1974 Harvard University Physics graduate. The GNU project was primarily an ethical initiative which Stallman announced in September 1983 on net.unix-wizards and net.usoft[1]. He began his announcement: "Starting this Thanksgiving I am going to write a complete Unix-compatible software system called GNU (for Gnu's Not Unix), and give it away free to everyone who can use it. Contributions of time, money, programs and equipment are greatly needed." This announcement,[2] is widely thought of as the launch of the free software movement, although its deep roots lie in hacker culture.

In the 1990’s, the organization he founded to advocate for free software split into two parts: 1) Free Software Foundation (Stallman’s first priority), and 2) the “Open Source” movement (a term coined at the time of the split to differentiate it from the Free Software Foundation). Stallman remained with the Free Software Foundation, focused on the ethical issues surrounding misuse of digital technology and the dangers and hidden costs of relying on proprietary software. The Open Source movement, in contrast, is focused on finding the best ways to develop software as a group, and while Stallman does not disagree with Open Source aims, he chooses to keep the two purposes completely separate.

In a 2011 talk to the Computer Science department at the University of Pennsylvania[3], Stallman made the following points, which summarize his advocacy for the Free Software Foundation:

In 2019, Stallman ran amok of public sentiment when private emails of his were exposed which seemed to defend fellow MIT colleague Marvin Minsky of charges that Minsky either participated in, or benefited from, Jeffrey Epstein's sex trafficking circle. At that time, Stallman resigned from the board of the Free Software Foundation. Stallman's decision to return to the board of FSF in 2021 has caused a firestorm of objection across the internet. Past comments of Stallman's have been dredged up that allege to prove, also, that Stallman is tolerant of pedophilia. His popularity is at an all-time low and probably ruined forever.