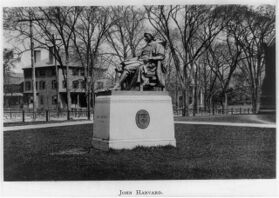 Harvard University is located in Cambridge, Massachusetts. It is the oldest and perhaps most prestigious institution of higher education in the United States and is widely considered to be one of the finest in the world. Harvard College, which is the undergraduate branch of the University, was founded in 1636 and, two years later, was named after John Harvard, a nearby cleric who, in his will, left the institution his library and some money. Like most other early American universities or colleges, Harvard's original agenda was religious. According to a 1643 pamphlet, its mission was "To advance Learning and perpetuate it to Prosterity; dreading to leave an illiterate Ministery [sic] to the Churches." In the centuries that followed, however, secularism gradually displaced religion.[1] Today the College is frequently confused with the larger University, which has, among other branches, a famous law school and equally well-known medical school. The current president of Harvard University is Drew Gilpin Faust, a historian.

In 2006 The New York Times wrote that, "The most prestigious college in the world, of course, is Harvard, and the gap between it and every other university is often underestimated. Colleges that emphasize teaching may well offer a better education than Harvard. But it still exerts a pull on teenagers that is unmatched." [2] According to the most recent college ranking by U.S. News & World Report, however, Harvard is rated second, after Princeton University.[3]