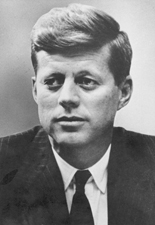 John Fitzgerald Kennedy (1917-1963), known as Jack or JFK was an American politician and the most prominent member of the Catholic Kennedy family. Already famous after graduating from Harvard for his analysis of world affairs, While England Slept (1940), he became a war hero and was elected as a Democrat to Congress in 1946, and to the Senate in 1952. His Profiles in Courage (1956) won the Pulitzer prize and solidified his role as an intellectual leader, but he played a minor role in Congress. Despite severe medical problems and frequent sexual liaisons (which all remained secret), he narrowly defeated Republican Richard M. Nixon in 1960 by attacking the Eisenhower administration as tired and old-fashioned. He was the first (and only) Catholic elected president; his religion was a major issue in 1960 and his defense of his political independence set the standard for the separation of religion and politics. He promised a new frontier, bringing, along with his dazzling wife Jackie, youth, vigor, high culture and intelligence to the White House.

Kennedy served as the 35th President of the United States from 1961 to 1963 as a Democrat. His 1000 days in office were characterized by the promised glamor and celebrity, but the long-term accomplishments were limited. He confronted the Soviet Union over Berlin, and watched in dismay as the Berlin Wall was built; he confronted Cuba with a failed invasion in 1961 and a vigorous response to the Soviet introduction of nuclear-armed missiles in 1962 that brought the world to the brink of nuclear war. In the Cuban Missile Crisis, Kennedy forced the removal of the Soviet weapons, and reached an arms limitation agreement with the Soviets, while imposing an economic blockade on Cuba that remains in effect today. He sent 16,000 soldiers (in non-combat roles) into the Vietnam War.

Apart from the successful launch of the Peace Corps, nearly all his domestic initiatives were blocked in Congress; they became part of his legacy and achieved passage under his successor, Lyndon B. Johnson. Kennedy's assassination shocked the nation, with effects that resonated in American life for decades. He remains a glamorous symbolic figure of the 1960s and icon of the Democratic party.

Kennedy was born in 1917 in Brookline, Massachusetts. He grew up in an Irish Catholic family already steeped in politics and public service, with his grandfather the former mayor of Boston and his father Joseph P. Kennedy a senior New Deal official. He graduated from Harvard University in 1940. During World War II he joined the United States Navy and participated in war's Pacific theatre of operations. Serving on a patrol boat, he was injured in a naval battle, where he acted heroically. In 1946, he was elected by his home state to the United States Congress. Besides politics, he was an avid swimmer and he wrote a popular book, Profiles in Courage.

Kennedy may have had autoimmune polyendocrinopathy that manifested when he collapsed in England in 1947 and perhaps earlier in his candidacy for Congress in 1945.[1]

He served as a congressman from 1947 to 1953 and was elected to the Senate in 1952. In 1956, he attempted to gain the Democratic nomination for the Vice Presidency, and was favored by the presidential candidate Adlai Stevenson. However, Estes Kefauver was chosen instead. He served in the Senate until 1960, when he resigned to assume the presidency.

In 1960, Kennedy was nominated by the Democratic Party for the presidential election. His opponent Republican opponent was Vice President Richard Nixon. The first debates ever held between presidential candidates excited a national television and radio audience. The younger, more self-assured, more telegenic Kennedy gained advantage against Nixon, who appeared awkward on the television.

Building on the enormous wave of ethnic Catholic support for Kennedy, reinforced by Kennedy's book A Nation of Immigrants, the campaign gave priority to ethnic outreach efforts such as Viva Kennedy as part of its effort to reinvigorate the Roosevelt coalition. It went beyond earlier efforts in wooing African Americans and Latinos, who provided the winning margin in several states, and it ushered in modern era of racial/ethnic politics.[2]

Kennedy's presidency only lasted for 1000 days, and very little legislation was passed, or major changed initiated. His first controversial decision was the selection of his brother Robert Kennedy as Attorney General. His brother Ted Kennedy took over the Senate seat as soon as he turned 30 and was eligible.

During his administration, Kennedy proposed the Medicare but did not succeed (Medicare was enacted, however, under Lyndon Johnson).

While Kennedy voted against the 1957 Civil Rights Act as senator, he made clear through his campaigning for president that he would support civil rights legislation (and by doing so ensured a large percentage of the African-American vote which was drastically needed considering the close election); however, when Kennedy became president he didn’t do very much for civil rights. This may be due to the very low priority Caucasian voters gave to civil rights in the maelstrom of issues happening during the time. Kennedy did submit one important piece of civil rights legislation on the same day that he famously sent the national guardsmen to escort African-American students into the University of Alabama, where the door was being blocked by the governor George Wallace. This piece of legislation would become known as the Civil Rights act of 1964, which would be passed after Kennedy’s death. 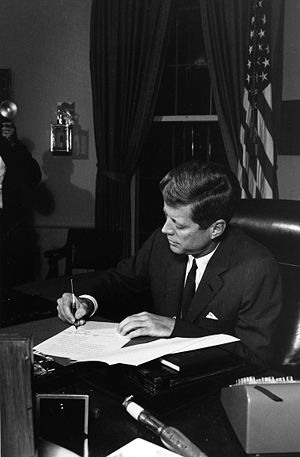 Kennedy's presidency was marked by extensive international involvement of the United States, including the establishment of Alliance for Progress as an aid program for Latin America, and the Peace Corps as a service opportunity for young people. He maintained a strong stance against Communist government in Cuba. As his term began he ordered the CIA to lead an invasion of Cuba using several thousand CIA-trained Cuban exiles to overthrow the regime of Fidel Castro. The invasion was a fiasco, with all the invaders captured or killed; Kennedy ransomed them. In 1962 the Soviet Union secretly installed missiles, causing the Cuban Missile Crisis, which could have escalated into a nuclear war. Kennedy responded by a quarantine on Cuba, forcing Khrushchev to remove the missiles publicly, as Kennedy secretly removed American missiles in Turkey.

Trying to contain Communism by modernizing the ally South Vietnam, he sent 16,000 military advisors, plus money and munitions to Vietnam, hoping to defeat the Communist insurgency there. His successor, Lyndon B. Johnson, greatly escalated the involvement in the Vietnam War.

During his presidency, he nominated two justices to the Supreme Court. Byron White is best known for his dissent in Roe v. Wade, and labor union lawyer Arthur J. Goldberg, who later left the court to serve as the U.S. Ambassador to the United Nations.

on November 22, 1963, Kennedy died from being shot in Dallas, Texas. According to the first early reports, and then the Warren Commission, it was Lee Harvey Oswald who shot the president. His motives remain unknown and Oswald was himself murdered by Jack Ruby a few days later.

After the assassination, President Johnson appointed Chief Justice Earl Warren to lead a commission to investigate. The Warren Commission members include the future president Gerald R. Ford and Allen W. Dulles, former head of CIA.[3] The commission accepted the Single Bullet Theory proposed by the attorney and the future Senator Arlen Specter. However, any number of contradictory and unfounded conspiracy theories circulated for decades.

Many streets and public institutions were renamed in his memory, including John F. Kennedy International Airport in New York. The John F. Kennedy Presidential Library & Museum is located in Boston, Massachusetts, overlooking Boston Harbor. John F. Kennedy's younger brother, Edward Kennedy, served as a U.S. Senator from Massachusetts from 1962 until his death in 2009. His younger brother and political heir Robert Kennedy was assassinated in 1968, and numerous close relatives died in violent accidents.