Microsoft Windows is the name of several families of closed source software operating systems. Windows was first released by Microsoft in 1985. Windows holds approximately 90% of the desktop operating system market[1] and has been known to contain a great number of security threats throughout the years, partly because it is the most targeted system by malware developers. Windows has a graphical system, and was the first Microsoft product to allow input from devices such as a mouse. Before Windows, users of the Microsoft operating systems were limited to command line (plain text) input.

Computers running Windows have commonly been referred to as Personal Computers (PCs) for many years, as opposed to Macs, workstation computers, and supercomputers. A Windows system is typically found in the home and office environment, completing tasks for nearly every conceivable type of work, from displaying and editing text documents, to gaming and displaying x-rays. A version of Windows (called Windows Media Center Edition or MCE) is specifically geared toward acting as a "Media hub," providing rich content and various types of leisure, such as watching television or high definition movies.

There are two development tracks of Windows that were kept updated through subsequent versions: versions of Windows which still relied on an MS-DOS subsystem, and Windows NT, which was written from scratch on a completely new, Hybrid microkernel design. 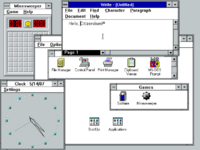 Windows started life as an attempt at creating a graphical user interface on top of MS-DOS. The first "breakthrough" version of Windows that started gaining in popularity was Windows 3.0. Earlier versions weren't feature complete in various ways yet, such as they didn't support overlapped windows, and they couldn't run MS-DOS programs very well. Windows 3.0 changed all that, and combined with the addition of Microsoft Office for Windows, popularity (and sales) of Windows boomed. Windows 3.1, usually running atop DOS 6.2, was the last release in this line. 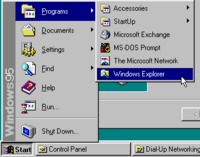 The original Start menu in Windows 95

In 1995, Microsoft completely re-designed the Windows interface with the new Windows 95 operating system. This was a real stand-alone operating system, not just a skin atop DOS.

Windows 95 also introduced the "Start menu". The Start menu is contained in a button on the lower left of the screen (by default; it can be moved). When clicked, this button displays a list of groups, such as Programs, Documents, and Settings, in addition to some special buttons, such as Help, Run, and Shut Down. Each group is a sub-menu of files or programs. Each sub-menu can be divided into even more groups, so everything inside it can be organized.

Windows 95 was followed by Windows 98, then 98 SE (second edition) with some important bug fixes. The lineage of Windows as a 16 bit, then hybrid 32-bit operating system ended with the release of Windows ME, Millennium Edition. The next version of Windows, Windows XP (Windows NT 5.1) merged the two product lines together, with Windows XP Home for home users and Windows XP Professional for business users.

The Microsoft Windows NT (NT = New Technology) project was created because Microsoft needed an operating system that could compete with Unix workstations in terms of software stability, reliability and scalability. Windows NT was originally intended to complement the MS-DOS based versions of Windows, and provide a viable, marketable platform for businesses.

Microsoft intentionally "rebuilt from scratch" Windows NT, and its architecture still serves as the base of Windows Vista and the Windows Server line of Microsoft products

In October of 1988 Dave Cutler and several hand picked engineers from the Digital Equipment Corporation VMS team was hired away and assigned a new project: build a viable operating system for enterprise users that would focus on reliability.

TODO: Much, much more on Windows NT development. "Show Stopper!: The Breakneck Race to Create Windows NT and the Next Generation at Microsoft (Hardcover) would be a great source for this work.