Hello, and welcome to CZ! 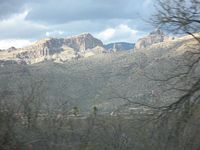 Tucson mountain ranges, viewed from Mt. Lemmon. I lived in Tucson for about two years, shortly after leaving the Army

I've always been passionate about and interested in technology in its myriad forms, from computers to Sci-Fi, since around age 12 (the "Age of Reason" as it were). In the past few years my career has led me into the information security field, for which I have always had a "soft spot in my heart." I've always been curious about pushing technology to its limits, and this curiosity dovetails will with the InfoSec field.

If you're so inclined, a summary of my 'professional life' is located here on LinkedIn: [1]

Please help out on the Computers Workgroup articles! The four or five of us that regularly edit articles there can't do it alone. You can see related changes in the Workgroup here.

See Image_talk:MOS_6502.jpg for an interesting dialog between myself and constable Stephen Ewen about importing images from Wikipedia or Wikipedia Commons. Things are definitely not always what they seem to be.

The Computer security family of articles: