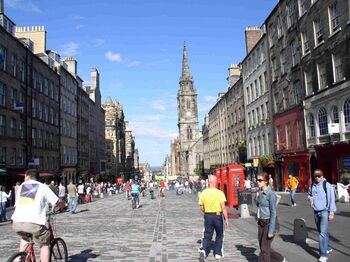 The Royal Mile [1] is the main street in Edinburgh's Old Town. It runs steadily downhill from Edinburgh Castle to the Royal Palace of Holyroodhouse at the foot of Arthur's Seat, a distance of just over a mile. The New Scottish Parliament building is at the bottom of the Royal Mile, opposite the Palace. All along its way, from the Castle Esplanade, Castlehill, Lawnmarket, High Street, Canongate to Abbey Strand, The Royal Mile has many features of historical interest, making it the focus of tourist attention in the city. During the Fringe Festival in July of each year, the Royal Mile is also the focus of street performances and previews of the many shows that are part of the festival. St Giles' Cathedral, the High Kirk of Edinburgh, is in Parliament Square on the Royal Mile; its four main pillars are dated to 1190. Just outside the kirk, inset into the pavement is a cobblestone mosaic in the shape of a heart - the "Heart of Midlothian", that marked the entrance to Edinburgh's 15th century tolbooth. Originally an office for collecting tolls, the tolbooth became a prison, with a scaffold outside. Prisoners would spit on the door of the tolbooth and this tradition is still preserved as the custom of spitting on the Heart of Midlothian. Amongst those publicly hanged there is Thomas Aikenhead (c. 1678 - 1697), a student of Edinburgh University who was the last person in Britain to be executed for blasphemy.

The Royal Mile contains entrances to many small alleys and closes, with picturesque names and often interesting histories. Mary King Close[2] was one such Close. In 1753, development of a new building, the Royal Exchange (designed by John Adam) on the Royal Mile involved building over Mary King Close. The Royal Exchange is now the City Chambers – the administrative centre of the City, and what was once the street level of Mary King Close remained intact, though now completely overbuilt. The Close was forgotten, until in 1928 a council workman discovered an entrance to it. The Close is now open to visitors and is a major tourist attraction, encouraged by convenient tales of haunting.

From Palace to Castle

"At the extremity of the east end of the city stands the palace or court, called Haly-Rood House; and you must fetch a little sweep to the right hand to leave the palace on the left, and come at the entrance, which is called the Water Port, and which you come at thro' a short suburb, then bearing to the left again, south, you come to the gate of the palace which faces the great street. From the palace, west, the street goes on in almost a straight line, and for near a mile and a half in length, some say full two measured miles, thro' the whole city to the castle, including the going up the castle in the inside; this is, perhaps, the largest, longest, and finest street for buildings and number of inhabitants, not in Britain only, but in the world." (Daniel Defoe) (ca 1659-1731) [3]

At the foot of the Royal Mile, and in the shadow of Arthur's Seat, the Royal Palace of Holyroodhouse (Holyrood Palace) is an official residence of the Queen, but it is open to the public when she is not in residence. The Palace was started in 1501 and completed by Charles II. Adjacent to the Palace is Holyrood Abbey, an Augustinian Abbey built in 1128 at the order of King David I of Scotland. The Abbey is the site of many royal coronations and marriages. Charles I was crowned there, and the twenty-two year old Mary, Queen of Scots married the nineteen year old Darnley there on 29th July 1565. The roof of the abbey collapsed in 1768, leaving it a ruin.

Adjacent to Holyrood Palace and opposite the entrance to the new Scottish Parliament building, the Queen's Gallery[4] displays exhibitions of art from the Royal Collection.

According to legend, on 14 September, 1128, King David I was attacked by a stag while out hunting in the forest of Drumselch, which then lay below Arthur's Seat. Thrown from his horse, he raised his arms to protect himself, but instead of its antlers he was confronted by a cross (or rood). He established a monastery at the site of this miraculous escape, (which was to become Holyrood Abbey), and he granted a charter to the adjacent burgh which was to become Canongate. The walk from the Abbey to the entrance to the walled city became known as 'Canon's Gait' or Canongate. The arms of the burgh include a stag's head surmounted by a cross. By 1663 the burgh of Canongate had six parishes; its Tolbooth, built in 1591, housed the burgh's Council Chamber, court and later a prison. In 1865 it was subsumed into the City of Edinburgh. 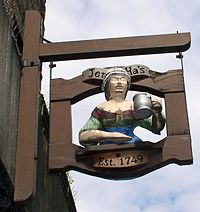 Queensberry House was commissioned in 1681 by Lord Haltoun but sold upon completion some 5 years later to William, the 1st Duke of Queensberry. William's son James (the 2nd Duke of Queensberry) then lived here with his children including Lord Drumlanrig, his eldest son, whose existence was kept secret for many years as he was considered a 'wild madman', and lived chained up in its ground floor rooms.

James was not a popular figure in Scotland as he had accepted a bribe to push through the 1707 Treaty of the Union with England. After one evening spent canvassing, James returned home to find that Lord Drumlanrig had escaped, and was devouring the flesh of a young kitchen boy who was still roasting on the spit. The Queenberry family remained in the house until 1832. Subsequently, the building became a house of refuse for the destitute and then became a Hospital for the elderly, which was closed in 1975. The house is now part of the development of the New Scottish Parliament, but it retains its original exterior.

Canongate Tolbooth was built in 1591 to collect tolls and other taxes. It also served as the council house, courtroom and prison for the Canongate. The large clock face is dated to 1820. A Latin inscription on the front of the building reads: The place of the seal of the Burgh. For one's country and one's successors, 1591.

The Canongate Kirkyard, just behind the Tolbooth, contains the graves of Adam Smith (1723-90), author of The Wealth of Nations, the painter Hugh 'Greek' Williams (1773-1829), and the poet Robert Fergusson (1750-74), who is said to have inspired Robert Burns. A statue of Robert Ferguson stands outside the Kirk.

The Museum of Edinburgh [6], formerly known as Huntly House, occupies 16th and 17th century buildings. Exhibits include: the feeding bowl and collar belonging to Greyfriars Bobby; the National Covenant, the petition for religious freedom signed by Scotland’s Presbyterians in 1638; and the original plans for Edinburgh’s New Town, drawn by the young architect James Craig. 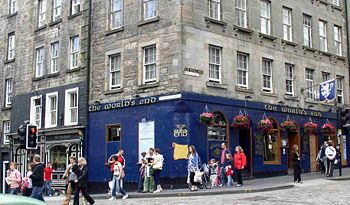 The World's End public house was the site of the last reported sighting of two young women, murdered in 1977. In 2007, a convicted killer and sex offender was brought to trial on DNA evidence, but the trial collapsed amidst controversy[7] 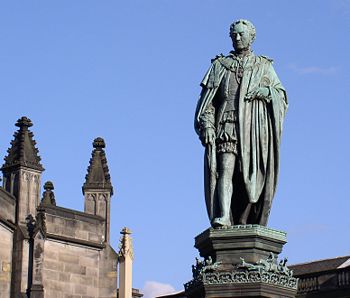 The Lawnmarket (the name is a corruption of 'land market'), which connects Castlehill to the west end of the High Street, was once the site of the city's linen market, established there by King James III (of Scotland) in 1477. The Lawnmarket has the best preserved examples of close, courtyard and 'land' developments in the city, including James Court, with Lady Stair's House and which is fronted by Gladstone's Land; Riddle's Court, which includes Baillie McMorran's House; Mylne's Court, now residential accommodation for postgraduate students at The University of Edinburgh and which gives access to the Assembly Hall of the Church of Scotland; and Riddle's Court. Major Thomas Weir (1599-1670), who confessed to sorcery and incest and was sentenced to be strangled and burned at the stake, lived nearby in West Bow with his sister Jean, who was convicted of witchcraft and hanged in the Grassmarket.

On the corner of Lawnmarket and George IV Bridge, Deacon Brodie's Tavern perpetuates the memory of Deacon William Brodie (hanged in 1788). Brodie led a double life; he was an apparently successful tradesman and a well-connected socialite who met Robert Burns and the painter Sir Henry Raeburn, but he was also a heavy gambler with two mistresses (who did not know of each other's existence) and five illegitimate children. He began to take wax impressions of the keys to the houses in which he was working, later returning at night to rob them. His life is said to have inspired Robert Louis Stevenson's story of "Dr Jekyll and Mr Hyde." Brodie's Close off the Royal Mile however is named not after him (despite widespread misinformation) but after his father, Francis, who had his cabinet-making business there. Diagonally opposite Deacon Brodie's tavern, a brass plaque marks the site of the last public execution in Edinburgh. On 21st June, 1864, George Bryce ("The Ratho murderer") was hanged for the murder of Jane Seaton.

Gladstone’s Land, now owned by the National Trust for Scotland, is the 17th century tenement home of an affluent merchant, Thomas Gledstanes. The house is decorated authentically, and two floors are furnished to give visitors an impression of life in Edinburgh's Old Town 300 years ago. Notable features include the painted ceilings and a reconstructed shop booth with replicas of 17th-century goods.[12]

At the summit of the Royal Mile stands Edinburgh Castle, one of the UK's leading tourist attractions, the Castle's features include St Margaret's Chapel - Edinburgh's oldest building, dating from the 1100s; Crown Square - the main courtyard, developed in the 15th century; The Great Hall with a hammerbeam roof built by James IV; The Half Moon Battery, from the late 16th century; and The Scottish National War Memorial added after the First World War. The Edinburgh Military Tattoo[13] is held every Summer in the esplanade outside the Castle, laid out in the 19th century as a parade ground for troops. Cannonball House, a 16th century tenement house adjacent to the esplanade is so named after for a cannonball lodged in its west wall. Tourists are told that the cannonball was fired from the castle, while under siege by the Jacobites in 1745.[14]