John Knox House on the Royal Mile in the Old Town of Edinburgh in Scotland, is a town house, built before 1490. The house displays exhibits about John Knox, a Protestant leader born between 1505 and 1515, who died at Edinburgh on 24 November, 1572.

"Unknown until past forty, [Knox] had then before him five-and-thirty years of splendid and influential life, passed through uncommon hardships to an uncommon degree of power, lived in his own country as a sort of king, and did what he would with the sound of his voice out of the pulpit." [1] 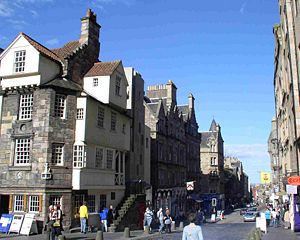 (CC) Photo: Citizendium
John Knox House consists of two town houses (or "lands") with the earlier part constructed about 1470 as part of the redevelopment of the city's walls. The exterior of the front house is much the same as that created in 1560.

John Knox is a controversial figure in Scotland's history, who was appointed minister of the Church of St. Giles' when the Reformed Protestant religion was ratified by law in Scotland in 1560. His History of the Reformation made him a leading figure in the Scottish reformation. He was outspoken in his attacks on the Catholic clergy of Scotland, accusing them of being "gluttons, wantons and licentious revelers." The distaste was mutual; according to the Catholic Encyclopedia [2], "permeated with the spirit of the Old Testament and with the gloomy austerity of the ancient prophets, [Knox] displays neither in his voluminous writings nor in the record of his public acts the slightest recognition of the teachings of the Gospel, or of the gentle, mild, and forgiving character of the Christian dispensation."