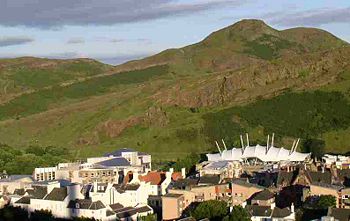 In the centre of the city of Edinburgh, enclosed within Holyrood Park (which is adjacent to the Royal Palace of Holyrood) is Arthur's Seat, the basalt lava plug of a long extinct volcano, last active around 335 million years ago, during the Carboniferous period. The hill rises to 251 m (823 feet), and overlooks Edinburgh's Old Town to the West. The most famous of its rock faces is off the Radical Road at the south end of Salisbury Crags. The hard dolerite of the Crags lies above softer sandstones, and the boundary between them is irregular, revealing how the dolerite is formed from intrusive magma that squeezed between the sandstone layers. James Hutton (1726-1797), the 'father of geology', used these rocks to argue that the sandstone and dolerite were formed by different processes, and at different times.[1]

Two stony banks on the east side of Arthur's Seat are the remains of an Iron Age hill-fort. In 1836, seventeen tiny wooden coffins each containing a carved figure were found in a small cave just below the summit. It has been suggested that they may be associated with witchcraft or that they were intended as memorials to the victims of William Burke (1792-1828) and William Hare (1804-ca 1860), who sold bodies for dissection to the anatomist Dr Robert Knox of the Edinburgh Medical College, and turned to murder to satisfy the demand.[2] Burke and Hare murdered at least sixteen people and perhaps as many as thirty. Burke was hanged on 28th January 1828 (Hare escaped execution by giving evidence against Burke), and his body was given to the medical school to be dissected. A pocket book which students bound from his skin is on display in the Surgeons' Hall Museum[3] and his skeleton is displayed at the Anatomy Resource Centre of the University of Edinburgh.[4]

At the foot of Arthur's Seat is the Sheep Heid Inn close to the 12th century church of Duddingston. The Inn claims to be Britain's oldest, possibly dating to 1360. It also claims to be the site of the "resurrection" of Maggie Dickson, a Musselburgh fishwife who was publicly hanged in Edinburgh's Grassmarket in 1724 (or 1728 by some sources) for "the murder of her bastard child" (according to a 19th century broadsheet,[5] which erroneously gives the date of execution as 1813). According to the Inn's version, the Inn was hosting her funeral entourage when a groan was heard from her coffin. The coffin lid was prized off, revealing a still living Maggie, who was given a reviving dram of whisky. Having been convicted and hanged once, Maggie couldn’t be so punished again and went on to live a long life bearing several children. The factual basis of the story is uncertain, but Maggie Dickson is also remembered today in the name of a public house in West Bow, adjoining the Grassmarket.

Then, as for Arthur's Seat, I'm sure it is a treat
Most worthy to be seen, with its rugged rocks and pastures green,
And the sheep browsing on its sides
To and fro, with slow-paced strides