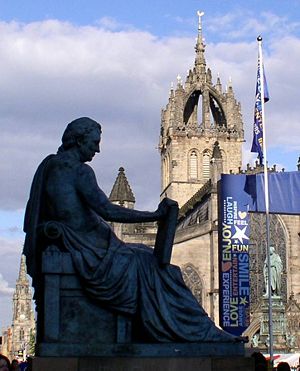 Statue of David Hume. "Man is a reasonable being; and as such, receives from science his proper food and nourishment: But so narrow are the bounds of human understanding, that little satisfaction can be hoped for in this particular..." Hume recognised clearly the difficulties in gaining a general understanding merely by accumulating observations.

David Hume (April 26, 1711 – August 25, 1776) was a Scottish philosopher, economist, and historian. He is considered one of the most important figures in the history of Western philosophy and the Scottish Enlightenment. Although in recent years interest in Hume's work has centred on his philosophical writing, it was as an historian that he first gained recognition and respect.

Hume was born in Edinburgh, on the 26th April 1711, the second son of a middle-class country family who lived in the south of Scotland. His father, Joseph Hume (or Home), was owner of Ninewells, a small estate in Berwickshire. David was the youngest of three children, who after the death of the father in 1713 were brought up by their mother, Fatherine, the daughter of Sir David Falconer, president of the college of justice, and a staunch Calvinist. She survived until 1749, long enough to see the fame of the younger son securely established. "Our Davie," she is widely quoted as saying, "Our Davie’s a fine good-natured crater, but uncommon wake-minded." Whether by "wake-minded" she meant "weak-minded" or "alert" is unclear.[1]

David Hume studied at the University of Edinburgh for three to four years, left at age sixteen in preparation to become a lawyer, but soon gave that up. Two years later he had a nervous breakdown from his uninterrupted and passionate study of philosophy, and after recovering went to France for three years to write a book he published anonymously; A Treatise of Human Nature. It wasn't very well received at the time and Hume, having failed to make an impact in London retired to his family home for the next eight years, producing at that time his volume of Essays. There were better received, but Hume's criticism of religion prevented him from becoming a professor of philosophy in Edinburgh in 1744. His convictions also prevented him from advancement in Glasgow years later.

In the following years Hume spent time tutoring a nobleman who was later certified as insane. However, Hume's prospects improved. He became secretary to a general who led a military expedition to the French coast and shortly after a secret mission to Vienna and Turin. These posts made Hume wealthy and he returned to Scotland, living comfortably with his brother and then, in Edinburgh, with his sister. During the next fifteen years he wrote his major works; The two Enquiries, the remainder of his Essays, two books on religion and the six volumes of the History of England.

From 1763 to 1766 he served as secretary to the British ambassador in Paris. Returning to London, he was appointed Undersecretary of State. He resigned two years later as a result of poor health and spent the rest of his years in Edinburgh, revising his essays, conducting a large correspondence with many distinguished friends and became increasingly famous as an essayist and historian.

Like John Locke and George Berkeley, Hume was an empiricist - that is to say that he believed knowledge is derived from experience rather than reason. He had little time for metaphysical a priori explanations ("hypothes[es], which can never be made intelligible") but attempted to construct a "science of human nature" in the Treatise and the Enquiry. He held that little knowledge can be gained by deduction from ideas, and as the causal interactions of physical objects are merely uncertain matters of fact, he argued that our belief that they exhibit any necessary connection can never be rationally justified, and he concluded that a severe skepticism is the only defensible view of the world. He argued that we cannot even rationally justify our beliefs in the reality of the self, or the existence of an external world.

In An Enquiry concerning Human Understanding Hume defines “moral philosophy” as “the science of human nature,” and distinguishes “two different manners” in which it has been pursued by philosophers. The first manner, reflecting positions taken in Hume's time by Shaftesbury and Francis Hutcheson, regards humans as active creatures, driven by desires and feelings and “influenced…by taste and sentiment,” seeking some things and avoiding others according to their perceived value.

The second manner is to regard humans as reasonable creatures, and aims “to find those principles, which regulate our understanding, excite our sentiments, and make us approve or blame any particular object, action, or behaviour.” They seek to discover hidden truths that will “fix, beyond controversy, the foundations of morals, reasoning, and criticism.”

Hume's approach to discovering “the proper province of human reason” is skeptical and critical.

"Accurate and just reasoning is the only catholic remedy, fitted for all persons and all dispositions, and is alone able to subvert that abstruse philosophy and metaphysical jargon, which being mixed up with popular superstition, renders it in a manner impenetrable to careless reasoners, and gives it the air of science and wisdom."

"There Aikenhead was hanged for a piece of boyish incredulity ; there, a few years afterwards, David Hume ruined Philosophy and Faith, an undisturbed and well-reputed citizen ; and thither, in yet a few years more, Burns came from the plough-tail, as to an academy of gilt unbelief and artificial letters." (Robert Louis Stevenson[2]

The Edinburgh that Hume lived in was still emerging from the rigid Calvinism of John Knox, a Protestant fundamentalism that in 1697 had seen a young student, Thomas Aikenhead hanged in public for blasphemy for expressing atheist opinions in private conversation. Hume though, was openly known for his atheism, and was well tolerated, in the spirit of the Scottish Enlightenment that encouraged questioning in all things. While supervising the building of his house in Edinburgh's New Town, Hume often took a short cut to the New Town that took him across a bog - the Nor' Loch bog. On one trip he slipped and fell in. He was seen by an old fishwife who, recognising 'Hume the Atheist' refused to help him unless he would repeat the Lord's Prayer. Hume complied, and was duly rescued, and thereafter claimed that the Edinburgh fishwife was the most acute theologian he had ever met.[3]

Hume died from bowel cancer, maintaining his atheism to his last breath. He is buried on the eastern slope of Calton Hill, overlooking his home at No.1 St David Street, in Edinburgh's New Town; his tomb bears the epitaph that he wrote for himself: "Born 1711, Died [----]. Leaving it to posterity to add the rest." The night after Hume's funeral, it is reported that some of the crowd crouched behind the gravestones, to see if the devil would come to carry off his soul. 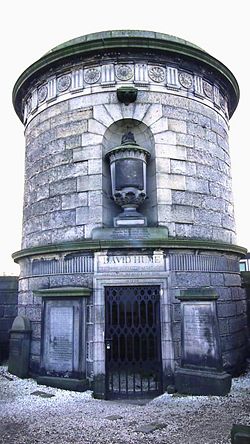