(CC) Photo: Citizendium
The Royal Palace of Holyroodhouse, from Arthur's Seat; the ruins of Holyrood Abbey can be seen to the right.

At the foot of the Royal Mile in Edinburgh, Scotland, and in the shadow of Arthur's Seat, the Royal Palace of Holyroodhouse (Holyrood Palace) is an official residence of the Queen. The Palace is open to the public when she is not in residence. The Palace was started in 1501 and completed by Charles II, and Mary, Queen of Scots lived there between 1561 and 1567. Today, the Palace is the setting for State ceremonies and official entertaining, and is open to the public when the Queen is not in residence there. Near the Queen's supper room, a brass tablet in the floor marks where the body of David Rissio, Queen Mary's secretary, was left after being stabbed repeatedly by several nobles. In 1745 the Palace was occupied by Prince Charles Edward Stuart (Bonnie Prince Charlie), the last Stuart to reside there. 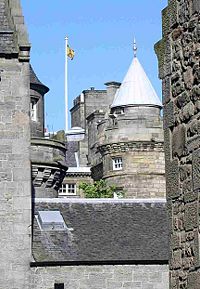 Holyrood Park, also known as the Queen's Park, because it is owned by the Queen, is probably the largest area of natural landscape remaining in the centre of any European city. The Park's 650 acres contains Arthur's Seat, Dunsapie Loch, the ancient ruin of St. Anthony's Chapel, and the Salisbury Crags.

Adjacent to the Palace is Holyrood Abbey, an Augustinian Abbey built in 1128 at the order of King David I of Scotland. The Abbey is the site of many royal coronations and marriages. Charles I was crowned there, and the twenty-two year old Mary, Queen of Scots married the nineteen year old Darnley there on 29th July 1565. The roof of the abbey collapsed in 1768, leaving it a ruin.

Adjacent to Holyrood Palace and opposite the entrance to the new Scottish Parliament building, the Queen's Gallery[1] displays exhibitions of art from the Royal Collection. 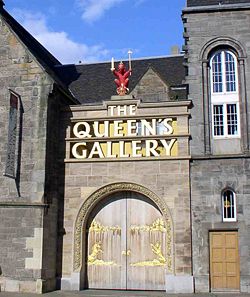