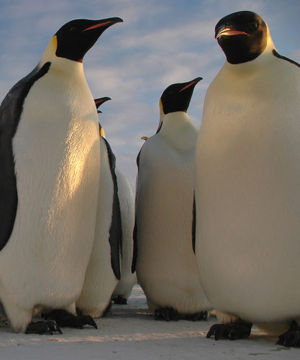 Emperor penguins are the largest species of these flightless birds.© Photo: Bryn Jones

Found almost exclusively in the southern hemisphere,[1] there are about 17 species of penguin. Adapted to harsh environments of barren land and cold water, these relatively large-bodied flightless birds are found from their southernmost range on Antarctica to north on the Galapagos Islands at the equator. All types of penguins share certain characteristics: they raise their young on shore and hunt underwater, and are marked with light and dark feathers. The best-known is probably the emperor penguin, which is also the largest of all the species.

Penguins are well-known worldwide for their apparently clumsy nature on land, where they can be observed waddling awkwardly in large colonies. All this changes, however, when penguins take to the water; with their wings adapted through evolution into fins, it is underwater that penguins 'fly'. Their bodies are adapted to make them superb divers, moving at speed through the frigid Antarctic Ocean or warmer waters further north.

Like other air-breathing marine vertebrates, penguins hunt and feed underwater. 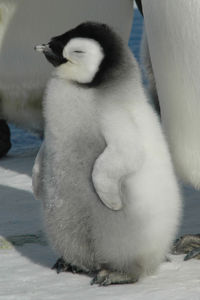 Penguins incubate their eggs using little or no nesting materials on the hard surfaces of their habitats. Especially thick eggshells apparently account for the rarity of prematurely broken penguin eggs. In Magellanic penguins (Spheniscus magellanicus), evidence shows that mollusk shells are preferentially eaten by females during the 'egg period', when shells are formed around her own eggs and those eggs are laid.[2]

Like all air-breathing vertebrates which dive into deep water, penguins are faced with the need to hold their breath and withstand high pressures. Although some species of penguins appear to swim in relatively shallow water, emperor penguins are deep divers - "regularly making dives to 400–500m. These dives usually last 4–5 min[utes], but commonly include dives of 8–12 min[utes] with a maximum dive of 22 min[utes]."[3] Twenty-two minutes is a very long time to breath hold. The ability to dive is aided by a large body size because, for every increase in size, more oxygen storage capacity is granted than increased metabolic expenditure is required. The eEmperor penguin is the deepest diver of all penguins.

Penguins do not rely only on their physical adaptations for diving, but also behaviourally increase their ability to deep dive through hyperventilation before diving.[4]

Penguins are subject to a substantial body of research work, as their health and survival rates could provide a good barometer for measuring climate change and how well they adapt to an increased human presence in their natural habitat.

Origin of the word 'penguin' 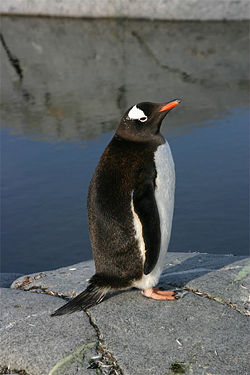 This gentoo penguin on Petermann Island, near the Antarctic Peninsula has more black then white on its head, a feature it shares with other penguin species.

The word penguin first indisputably appears in a letter of 1578 from Newfoundland; however, its true origins remain obscure. There are three main claims about its etymology in circulation, but no firm view; the following are the best known.[5]

One popular claim about the etymology of penguin is that it is from the Welsh pen gwyn, meaning 'white head'. This story relies on Celtic sailors in the northern hemisphere bestowing this name on the now-extinct Great Auk, a flightless bird unrelated to the Penguin but occasionally mistaken for it. Due to this confusion, penguin was later applied to penguins rather than auks. However, scholars have found fault with the idea that sailors from predominantly English-speaking regions would give the bird a Welsh name; indeed, the other name for the Great Auk, garefowl, is Norse, a language more usually associated with sailors of the North Atlantic. Not only that, but both penguins and great auks have rather more black than white on their heads (see gentoo penguin photo). A further reason to dispute the Penguin's Welsh connections is that the sixteenth-century inhabitants of Newfoundland apparently referred to the Great Auk as 'Pin Wing', in reference to its rudimentary wings. This name supposedly spread to the penguins far to the south, though there is little firm evidence for this.

One other possible origin for penguin is from the Latin word for 'fat', pinguis - somehow, this word came to be applied to penguins in English, possibly through the legendary auk-penguin mix-up. This may be related to the fact that the Great Auk's Latin name is Pinguinus.[6] This story seems to exist simply because a Latin word happens to resemble the English penguin; no relationship has been established.