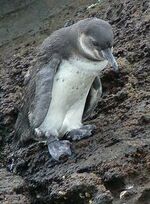 Penguins are well-known worldwide both for their apparently clumsy nature on land, and the way this unease gives way to a surprising grace underwater, as they move at speed through the frigid Antarctic Ocean or warmer waters further north.[1] Due to their slightly comic appearance, penguins have something of a presence in popular culture.

Although films such as Batman Returns have played on the idea that there is something rather sinister about these animals, the penguin has a fairly good reputation; its image helps sell everything from a popular publisher's books to a long-standing brand of chocolate biscuit.[2] They also act as mascots: the Linux operating system is supported by Tux the penguin, and the Norwegian Army has made one a regimental sergeant major.[3] 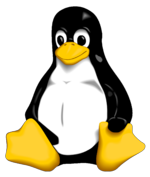 The Linux operating system's mascot, Tux, has given penguins a high profile among alternatives to Windows. © Image: Larry Ewing

Penguins often appear in children's entertainment; from Walter Lantz's inimtiable "Chilly Willy" to Otmar Guttman's Pingu, animated penguins have exhibited an inimitable blend of chutzpah and cuteness. Penguins have also made it at the cinema, with two recent releases: Happy Feet, aimed at younger moviegoers, and the controversial March of the Penguins,[4] which was intepreted by some conservative commentators as supporting their ideas about family values, though penguins exhibit the same ruthless streak as other animals who have to survive in harsh conditions and with limited resources. The penguin's image has also reached Japan, where its image appears in manga comics such as Penguin Revolution.[5]