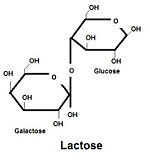 Lactose intolerance is "the condition resulting from the absence or deficiency of lactase in the mucosa cells of the gastrointestinal tract, and the inability to break down lactose in milk for absorption. Bacterial fermentation of the unabsorbed lactose leads to symptoms that range from a mild indigestion (dyspepsia) to severe diarrhea. Lactose intolerance may be an inborn error or acquired."[1]

Lactase is normally produced in the cells lining the small intestine and is required to break down the disaccharide lactose to the usable sugars, glucose and galactose. The loss of this function means that lactose, the major sugar in milk, cannot be broken down or metabolized in the gut. Consequently, milk product cannot be digested by people who are lactose intolerant but the enteral bacteria adapt and ferment the sugar in the intestines, often leading to bloating and gas symptoms.[2] Lactose intolerance is often referred to as lactase nonpersistence or lactase restriction since it is due to the lack of the lactase enzyme.

Population studies suggest that the most common form of lactase intolerance is the ancestral state for humans[3]; lactase is expressed during childhood but the activity decreases into adulthood. It is thought that new mutations led to variants of the lactase gene that remain switched on into adulthood. This is called lactase persistence and such variants are now abundant in populations that historically led a pastoral lifestyle, probably due to selective pressure for the new alleles.

Lactose intolerance is not the same as a milk allergy, which is a negative immune response to milk proteins.

Primary lactose intolerance is caused by genetic and environmental factors and occurs in adulthood. It occurs in populations where dairy products are not commonly available or consumed or have not been consumed for several generations. The allele that expresses the lactose intolerance phenotype (as the decline in the ability to produce lactase) is recessive.

Secondary lactose intolerance is also caused by environmental factors. It is often temporary and is a result of many gastrointestinal diseases from parasites or other causes. It can also be caused by infant colic, which damages the vili that produce lactase in the small intestine.[4]

Congenital Lactase Deficiency is present at birth and is the rarest form of lactose intolerance. It is an autosomal recessive genetic disorder caused by a mutation on the gene that produces lactase.[5]

Because most adult Americans of Western European descent exhibit lactase persistence, it is commonly assumed that it is the most common gene expression. As shown in Table 1.1, however, United States Whites are one of few population groups that show high levels of lactase persistence. Lactase persistence is only common in adults with ancestry in pastoral populations. This is supported by the low levels of lactose intolerance in the United States Whites and the African Fulani and Tutsi populations. The ancestry of a large percentage of United States Whites is in Western Europe, where pastoralism was a common means of sustenance. The nomadic Fulani tribe of East, Central, and West Africa and the Tutsi tribe of Rwanda and Burundi are two populations in Africa that, unlike most other African populations, have a history of pastoralism.[7] Because of this, they are among the few populations of African descent that evolved independently to genetically favor lactose tolerance.

Variance throughout populations is most likely due to a history of an economic reliance on pastoralism and, which results in the increased consumption of milk after childhood. Historically, the availabiliy of milk had disappeared after weaning. This rendered lactase useless and perhaps problematic for the digestion of other foods in humans. Therefore, there was a possible genetic advantage to ceasing the production of lactase. This would change the allele frequency making the expression of lactose intolerance genetically dominant. In populations with a history of pastoralism, however, there was a likely genetic advantage or allele shift toward lactose tolerance. The descendants of these populations, most European groups, tend to retain lactose tolerance. Distribution of lactose intolerance in Africa seems to be due to the same variation in economic history. Most populations of Africa exhibit lactose intolerance. However, individuals in groups that historically relied on pastoralism, such as the Fulani and Tutsi of Africa, tend to show lactose tolerance. [6]

Another theory about the ability of people of Northern European descent has to do with vitamin D. Because the allele that expresses in the lactose tolerance phenotype or continued lactase production in adulthood is recessive, selective forces keep it in existence. As mentioned previously, one selective force is the necessity of lactose consumption in pastoral communities. Another in Northern Europe is the reduced production of vitamin D due to the lack of direct sunlight in the region. The lack of vitamin D would make the population more vulnerable to bone diseases like rickets because of the poor absorption of calcium. The advantage of continued lactase production is the ability to consume milk after childhood. Milk contains high levels of calcium, which would help to counter the vitamin D deficiency. This theory has gained support because of its congruence with the theory that Northern European light skin color allows the most vitamin D production with little sunlight. [8] However, this theory is not relevant south of the equator, nor is it supported with archaeological or osteological evidence.

Lactase persistence is sometimes seen in groups that frequently consume dairy because they usually consume it as cheese or yogurt, forms in which bacterial action has already broken down the lactose.

Lactose is often added into medications or foods like bread, margarine, and processed meat. While dairy products are recommended for calcium consumption, there are some lactose-free nondairy products that contain high levels of calcium, such as green leafy vegetables, fish, and legumes.[9] Many nondairy foods are also fortified with calcium such as orange juice, cereal, and many dairy substitutes made with rice or soy.

Lactose intolerance is an autosomal recessive trait. The allele variations differ in the temporal aspect of their expression. The dominant allele is expressed later and, therefore, the phenotype for the dominant allele is the persistence of production of the lactase enzyme. The recessive allele is expressed only early in life and results in lactose intolerance. The gene that codes for the lactase enzyme is located on chromosome 2. This is the case in all populations, but the reguation of the gene varies. The lactase gene has four common haplotypes- A, B, C, and U. The A haplotype is usually found in populations that exhibit lactase persistence. Increased haplotype diversity occurs in populations that exhibit lactose intolerance. The expression of the lactase persistence phenotype gives genetic advantage to members of populations that consume milk. This is why most express the dominant allele in milk consuming populations. While it is still unclear, it is likely that lactase regulation occurs during DNA transcription because there is variation in mRNA levels between lactase persistent and impersistent individuals. [3] Genetic drift probably also played a role in latase gene diversity. The more homogeneous populations are probably as such because of genetic drift, this is why African cultures have more diversity in the haplotypes. Gene flow, mainly due to colonization, is probably the cause of continued frequencies of lactose intolerance and tolerance within populations. Lactose tolerance is rare in a worldwide sense, but it exists in scattered populations that have no contact. As shown by the low levels of lactose intolerance in United States Whites and the Fulani and Tutsi tribes, the genes evolved independently in different populations around the world.

While the American dairy industry holds that the frequency of lactose intolerance is overestimated, recent research in gastrointestinal problems shows that it is likely underdiagnosed in the United States.[11] It has also been argued that despite its depiction as a "perfect food" by the dairy industry and government funded health organizations, milk is in fact bad for the health of all adults due to added hormones and biological defects in many farmed dairy cows. [9] Still, government supported medical associations advocate the consumption of 2 to 3 servings of dairy daily as a source of calcium. Also, it is typically recommended that those who experience symptoms of lactose intolerance test the amount of dairy they can consume without experiencing negative effects. This is funded and widely accepted information despite the high incidence of lactose intolerance (as it is the more common expression of genes worldwide) and the many foods that contain calcium without lactose (for example, leafy greens).[11]