An allele is one version of one member of a set of genes that accounts for variations in genetically inherited characteristics. Alleles were first documented by Gregor Mendel in the flowers of pea plants. He developed a model to explain the 3:1 ratio in the inheritance patterns when breeding purple and white flowering plants. 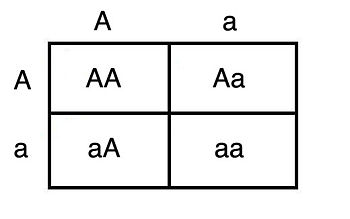 A punnett square shows all possible combinations of alleles in offspring that result from two heterozygous (Aa) parents.

For each characteristic, an organism inherits one allele from each parent. Because diploid organisms, organisms with somatic cells that have one set of homologous chromosomes from each parent, have two sets of chromosomes, a genetic locus is represented twice. The locus is represented by alleles. If the alleles at one particular locus are identical, the organism is referred to as homozygous and if they differ it is referred to as heterozygous. If the two alleles at a particular locus differ, then the dominant allele determines the observed trait, or the phenotype. The recessive allele has no observable effect on the organism but is part of the genotype, or genetic make up (set of alleles) present in an organism. The allele that is more commonly seen in an organism is the wildtype and the mutant allele is the modification.[1] There are instances in which the recessive allele does affect the phenotype of an organism. One instance is incomplete dominance, a phenomenon in which the heterozygous offspring display a phenotype in between the phenotypes of the parental varieties. This can be seen in the breeding of snapdragons. Snapdragons with red petals crossed with those with white can produce snapdragons with pink petals. Another instance is the codominance of both alleles. This is when the alleles simultaneously affect the phenotype in separate ways. This is apparent in the human MN blood group where both M and N molecules appear on the red blood cells of individuals with the MN genotype.[2]

A Punnett Square can be used to show all possible combinations of alleles in the offspring of two individuals of known genotypes. Usually the genotypes of the parents are represented by letters. Capital letters represent dominant alleles and lowercase letters represent recessive alleles. The letters showing the genotype of one parent go across the top of four boxes and the letters showing the genotype of the other go on the side of the boxes.[1]

The Hardy-Weinberg equation is used to calculate percentages for the allele frequencies for three possible genotypes (homozygous dominant, homozygous recessive, and heterozygous) assuming random combinations from two heterozygous parents. The equation is:

represents individuals with a homozygous recessive genotype (aa). The equation is derived from the equation (p+q) x (p+q)=1.[3]