Kanto (関東地方 Kantoo-chihoo) is a region of Japan located on Honshu island. It consists of seven administrative areas (prefectures), and is home to Japan's capital, Tokyo, as well as the cities of Yokohama, Kawasaki, Saitama and Chiba, among others. Within Kanto lies the Greater Tokyo Area, the world's most populated region.[1][2] 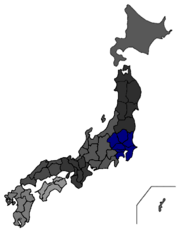 The total population of the Kanto region was 41,642,000 in 2006, of which 34,634,000 were in the Greater Tokyo Area.[3][4] Kanto's prefectures together account for about a third of Japan's population, and the area forms part of an urban corridor running north-eastwards from Kansai through the Chubu region, which makes Kanto part of one of the most densely-populated areas of the world, home to over half the country's population.[5]

The transformation of the samurai from landed proprietors to stipendiary officials residing in castle towns was at the heart of Japan's transition from a medieval to an early modern society. The growth of new markets, new towns, and new occupations enabled the 'daimyo' (大名 daimyoo, 'territorial lord') to pull the samurai up out of the villages and the villages to push them up into an urbanised class. The Hojo (北条氏 Hoojoo) daimyo accomplished this in the Kanto by encroaching on samurai prerogatives, transferring them and scattering their holdings, and by establishing direct legal links with all of the residents of the domain, thus displacing the samurai and bypassing their proprietary control.[6]

The policy of promoting a system of small farms in the Kanto area as a means of increasing the revenue of the Tokugawa shogunate, 1600-1868, also gave rise to commercialised agricultural production and an agricultural merchant class. This new merchant class, however, was detrimental to small-scale farming and threatening to the previously established government-authorized merchant class (御用商人 goyo shonin). The incorporation of these country merchants into the local government machinery, mainly for the purposes of peasant control, had the effect of interrupting the development of the merchant class into a modern industrial capitalist class. The shift toward market-oriented production in the eastern Kanto region in late Tokugawa Japan led to social and economic changes that elites believed were undesirable. Both taxation and social control depended on the existence of a base of rice farmers living in village communities. When peasants left the land the traditional elites lost control over them, and land went uncultivated. As a result, the authorities attempted to forestall change through sumptuary laws and moral injunctions.[7]