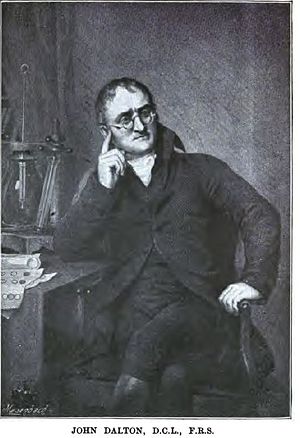 John Dalton (1766-1844) was an English scientist, one of the founders of modern chemistry — through his quantitative formulation of a chemical atomic theory — and a pioneer founder of modern meteorology. He taught mathematics and physical sciences at New College, Manchester, resigning his position in favor of lecturing, private tutoring and research, having begun his teaching career at the age of 12 years as founder and teacher of an elementary school in his local community.[1] [2] [3]

Thinking atomistically early on in his researches, Dalton inferred from experimental studies of the atmosphere, and other researches on gases, liquids and solids, an atomic theory of matter, the idea first suggested by the ancient Greeks, the Greek idea accepted without evidence by Robert Boyle and Isaac Newton earlier than Dalton, Dalton, however, the first to provide its experimental support, establishing that all elements did not have the same mass and size, a finding that not only contributed to the development of his atomic theory but also led to an explanation for the 'law of conservation of mass' and the 'law of definite proportions'. (see text box at below right).

He developed experimental methods for determining the relative weights of the atoms of different elements, he formulated the 'law of partial pressures' (Dalton's law) — "....where the pressure exerted by each gas in a mixture [of gases] is independent of the pressure exerted by the other gases, and where the total pressure is the sum of the pressures of each gas." [5] — and he formulated a law about the combining of elements into compounds, the 'law of multiple proportions', a law that made sense only in the light of Dalton's atomic theory.

Although Dalton's atomic theory received wide recognition early on for its important contribution to chemical understanding, skepticism persisted for many decades after its introduction, even in England.[6]

Dalton suffered from color-blindness and studied that affliction, which later physicians referred to as Daltonism.

Dalton’s chemical atomic theory,[7] the first theory to provide physical evidence of the existence of atoms, when laid out as a sequence of postulates and inferences (see below), did not arise entirely from novelties of ideas and experiments of Dalton’s dogged, rigorous, and creative mind. He incorporated the ideas and findings of others, including contemporaries, to the extent they inspired the development of his new system of chemistry and offered components essential to a compelling theory revolutionizing the progress of chemical science. Like Newton, he saw beyond the horizon by standing on the shoulders of giants, though only to establish the existence of a new horizon.

At heart, Dalton’s own accomplishment consisted in realizing the utilitarian importance, for chemistry, of the relative weights of atoms of the different chemical elements, and in establishing verifiable quantitative rules of combination of chemical elements in chemical compounds—two purely Daltonian insights requisite to cohere his new chemical system in the synthesized chemical atomic theory. It turns out that those insights emerged gradually while Dalton, the physicist, worked to satisfy scientific passions not driven by a need to enhance his knowledge of chemistry specifically, though Dalton certainly had read widely in chemistry, attended many lectures on chemistry while working as a scientist, and himself lectured in chemistry.

Like all great scientists, Dalton seems to have worked primarily to satisfy his understanding of phenomena, not to add to the store of knowledge. 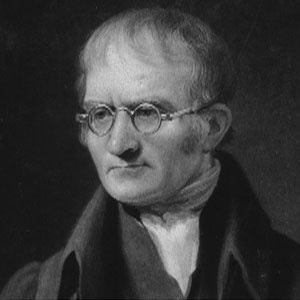 For another example, consider the elements nitrogen, N, and oxygen O. The element oxygen occurs in the compounds NO (nitric oxide) and NO2 (nitric dioxide). The ratio of oxygen weights (1:2) in those compounds contains the small whole numbers 1 and 2.

Note that in modern chemistry the concept "number of atoms" replaces "weight", used by Dalton. Now chemists say that the ratio of numbers of O-atoms in different NOx compounds (or in different N2Ox compounds) is expressible as a ratio of small whole numbers.[10]

Bernard Jaffe, in his popular book on the history of chemistry, Crucibles, The Story of Chemistry: From Ancient Alchemy to Nuclear Fission, describes the history of the law of multiple proportions:

While working on the relative weights of the atoms, Dalton noticed a curious mathematical simplicity. Carbon united with oxygen in the ratio of 3 [parts by weight] to 4 [parts by weight] to form carbon monoxide, that poisonous gas which is used as a fuel in the gas-range. Carbon also united with oxygen to form gaseous carbon dioxide in the ratio of 3 [parts by weight] to 8 [parts by weight]. Why not 3 to 6, or 3 to 7? Why that number 8 which was a perfect multiple of 4 [a ratio of 2-to-1]? If that were the only example, Dalton would not have bothered his head. But he found a more striking instance among the oxides of nitrogen, which Cavendish and Davy had investigated. Here the same amount of nitrogen united with one, two and four parts of oxygen to form three distinct compounds. Why these numbers which again were multiples of each other? He had studied two other gases, ethylene and methane, and found that methane contained exactly twice as much hydrogen as ethylene. Why this mathematical simplicity? [11]

Thinking atomistically, Dalton literally figured out the answer, using the figures, or symbols, he had invented for an atom of each of the known elements: (see accompanying illustration.) 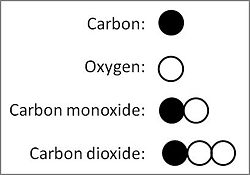 If, as Dalton's atomic theory proposed, elements consisted of atoms differing in weight among elements but of equal weights for the atoms of a given element, and compounds consisted of atoms of different elements, then when a fixed bulk weight of one element combined to form different compounds with another element, the ratio of the bulk weights of that other element in the different compounds must relate as ratios of small whole numbers, as those bulk weights reflect the accumulated weight of the atoms of that other element in single particles of the compounds, which themselves relate as ratios of small whole numbers.

In a series of compounds made up of the same elements, a simple ratio exists between the weights of one and the fixed weight of the other element.

And in a letter to Dalton, Berzelius wrote:

….this Law of Multiple Proportions was a mystery without the atomic hypothesis.[11]

By extension of Dalton's law of multiple proportions, the subscripts m, n, k, ... in a compound AmBnCk⋅⋅⋅ are integral numbers (integers). In other words, the law applies to the ratio of the differing elements in a given compound as well as the ratio of the same element in differing compounds.

The law of multiple proportions also helped lay the foundation for writing formulas for chemical compounds.

Exactly how Dalton arrived at his theory of chemical atoms has many differing scenarios by historians of chemistry. The true scenario may not proceed through any logical, ordered sequence.[12]

Dalton assigned the mass of the lightest element, hydrogen, 1, as the unit of atomic mass, enabling him to determine the relative atomic weights of different elements — relative to the unit weight of hydrogen.

— Not a universal law of nature

The law of multiple proportions as understood by chemists, includes ‘simple’ as an essential descriptor of the whole number ratios. The law therefore cannot be formulated as a precise proposition. It is clearly instanced, and exactly instanced, but it also has clear exceptions, and there are cases where it cannot be decided how the law applies....The hydrocarbons provide a series of examples of the difficulty: there are thousands of different compounds which contain just the two elements carbon and hydrogen. If a comparison is made between ethyne (acetylene - C2H2) and ethene (ethylene - C2H4), the law of definite proportions is very simply and obviously instanced. A sample of ethene containing the same mass of carbon as a sample of ethyne always has just exactly twice as much hydrogen as the ethyne, but if we compare pentane (C5H12) with ethyne, the ratio is 12:5 rather than the simpler 2:l. We could go on to compare heptane (C7H16)with butane (C4H10), obtaining a ratio of 35:32, or even C25H52 with C33H8, which gives 429:425! [footnote]. It can be seen that although the first comparison is in the ratio of simple whole numbers, the large range of compounds provides many comparisons which can be chosen to give ratios of almost any desired complexity. Certainly the last comparison could not fairly be regarded as providing an analysis in the ratio of simple [or small] whole numbers at all.[13]

For further reading regarding 'laws' in chemistry, see:[14] 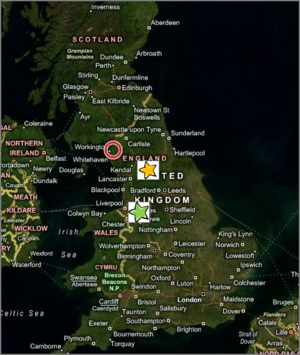 John Dalton entered the world in a thatch-roofed cottage in the village of Eaglesfield in England's northwest coastal county of Cumberland, on September 5 or 6, 1766, of Quaker parents Joseph and Deborah, his father a hand-loom weaver. He early showed intellectual promise and perseverance in learning. He had competent and inspirational schoolmasters, including an instrument-maker and meteorologist, Elihu Robinson, who gave him much attention. According to English chemist, H.E. Roscoe, who first isolated the element, vanadium, Dalton wrote of his early years in a letter dated 1832:

References and notes cited in text