IUE was first proposed in early 1964, by a group of scientists in the United Kingdom, and was launched on January 26, 1978 aboard a NASA Delta rocket. The minimum mission lifetime was initially set for 3 years, but it far exceeded the expectations of the astronomers and engineers and was eventually switched off in 1996 (for budgetary reasons, while still functioning at near original efficiency), exceeding the planned life by more than a factor of 6. It was the first space observatory to be operated in real time by astronomers who visited the groundstations in the United States and Europe. Astronomers made over 104,000 observations of different objects using IUE, including planets, comets, stars, interstellar gas, supernovae, planetary aurorae, galaxies, and quasars.

The concept for an ultraviolet spectographic astronomnical satellite was first proposed to ESRO, the fore-runner to ESA, by a group of British scientists in 1964. The proposal at the time was beyond the technological capability of ESA and so the concept was offered by Robert Wilson to NASA, who took up the idea and developed it as SAS-D (Small Astronomy Satellite-D). SRC joined the resulting project and provided the Vidicon cameras for the spectrographs as well as software for the scientific instruments. ESA provided the solar arrays to power the spacecraft as well as a ground observing facility in Villafranca del Castillo, Spain. NASA contributed the telescope, spectrograph, and spacecraft as well as launching facilities and a second ground observatory in Greenbelt, Maryland at the Goddard Space Flight Center.

According to the agreement setting up the project the observing time would be divided between the contributing agencies with 2/3 to NASA, 1/6 to ESA and 1/6 to the UK's Science Research Council. 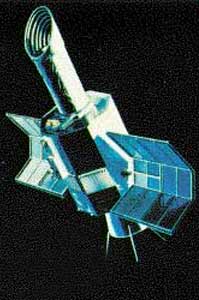