In physics, a magnetic field (commonly denoted by H) describes a magnetic field (a vector) at every point in space; it is a vector field. In non-relativistic physics, the space in question is the three-dimensional Euclidean space

—the infinite world that we live in.

In general H is seen as an auxiliary field useful when a magnetizable medium is present. The magnetic flux density B is usually seen as the fundamental magnetic field, see the article about B for more details about magnetism.

The SI unit of magnetic field strength is ampere⋅turn/meter; a unit that is based on the magnetic field of a solenoid. In the Gaussian system of units |H| has the unit oersted, with one oersted being equivalent to (1000/4π)⋅A⋅turn/m.

Relation between H and B

The magnetic field H is closely related to the magnetic induction B (also a vector field). It is the vector B that enters the expression for magnetic force on moving charges (Lorentz force). Historically, the theory of magnetism developed from Coulomb's law, where H played a pivotal role and B was an auxiliary field, which explains its historic name "magnetic induction". At present the roles have swapped and some authors give B the name magnetic field (and do not give a name to H other than "auxiliary field").

In the general case, H is introduced in terms of B as:

with M(r, t) the magnetization of the medium.

For the most common case of linear materials, M is linear in H,[1] and in SI units,

where 1 is the 3×3 unit matrix, χ the magnetic susceptibility tensor of the magnetizable medium, and μ0 the magnetic permeability of the vacuum (also known as magnetic constant). In Gaussian units the relation is

Many non-ferromagnetic materials are linear and isotropic; in the isotropic case the susceptibility tensor is equal to χm1, and H can easily be solved (in SI units)

For example, at standard temperature and pressure (STP) air, a mixture of paramagnetic oxygen and diamagnetic nitrogen, is paramagnetic (i.e., has positive χm), the χm of air is 4⋅10−7. Argon at STP is diamagnetic with χm = −1⋅10−8. For most ferromagnetic materials χm depends on H, with a non-linear relation between H and B and is large (depending on the material) from, say, 50 to 10000 and strongly varying as a function of H.

The magnetic flux density B is a solenoidal (divergence-free, transverse) vector field because of one of Maxwell's equations

This equation denies the existence of magnetic monopoles (magnetic charges) and hence also of magnetic currents.

The magnetic field H is not necessarily solenoidal, however, because it satisfies:

which need not be zero, although it will be zero in some common cases, for example, when B = μH. The H-field also exhibits discontinuity conditions at interfaces between media that may cause it to be non-solenoidal. 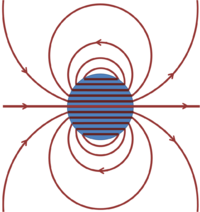 To illustrate the roles of B and H a classic example is a sphere with uniform magnetization in an applied external uniform external magnetic flux density B.[2] The figure shows the lines of the B-field when no external field is present; because B is solenoidal, field lines are closed. Outside the sphere, as shown below, the field is that of a magnetic dipole. To this dipole field, at the end of this example, a uniform external field is added oriented along the magnetization direction.

To begin, the fields introduced by the magnetized sphere alone are found. Because no conduction or displacement currents are present, the magnetic field H satisfies:

which allows the introduction of a potential Φ:[3]

Taking the divergence, and using the zero divergence of B:

which is Poisson's equation. For constant M, div M = 0. However, the solutions inside and outside the sphere must satisfy the boundary conditions on the sphere's surface that the normal component of B is continuous:

while the normal component of H may be discontinuous if there exist surface "magnetic" charges, σ1 and σ2, that is:

In particular, along the horizontal z-axis, θ = 0, and the magnetic field outside the sphere along its axis is:

showing the continuity of the normal component of B.

If an external magnetic field is imposed, Ha = Haûz it can be added to the zero field solution above. Then, inside the sphere the magnetic field H is Ha − M/3. The geometric factor 1/3, which depends upon the shape of the object being a sphere, is called the "demagnetizing factor".