where the magnetic moment mj of the j-th constituent is a vector property that determines the torque the object experiences in a magnetic field tending to align its moment with the field. Here, N is the number of magnetic moments in the volume V. The M-field is measured in amperes per meter (A/m) in SI units.[1] Usually the magnetization is referred to a particular location r by imagining the volume V to be a microscopic region enclosing point r, and is anticipated to change with time t in the general case (perhaps because the moments are moving), defining a magnetization field, M(r, t).[2]

At a microscopic level, the origin of the magnetic moments responsible for magnetization is traced to angular momentum, such as due to motion of electrons in atoms, or to spin, such as the intrinsic spin of electrons or atomic nuclei. According to the Bohr-van Leeuwen theorem. magnetism is a quantum mechanical effect; on the basis of classical mechanics, there cannot be diamagnetism, paramagnetism or collective magnetism (that is, most notably ferromagnetism or antiferromagnetism, but also ferrimagnetism and metamagnetism).[3] As stated by Van Vleck: "At any finite temperature, and in all finite applied electrical or magnetic fields, the net magnetization of a collection of nonrelativistic classical electrons in thermal equilibrium vanishes identically."[4]

and the magnetic moment mL of an electronic orbital momentum L is:

Here the factor mB refers to the Bohr magneton, defined by:

with g=2 for spin (J = S) and g=1 for orbital motion (J = L).[6] The resultant total spin S of an ensemble of electrons in an atom is the vector sum of the constituent spins sj:

Likewise, the orbital momenta of an ensemble of electrons in an atom add as vectors.

Where both spin and orbital motion are present, they combine by vector addition:

and the magnetic moment is

with g now the Landé g-factor or spectroscopic splitting factor:[7]

If a collection of atoms with these associated magnetic moments are now subject to a magnetic flux, all the atoms will experience a torque, in part due to the applied field and in part as a response to the magnetic flux they create among themselves. The calculation of the magnetization thus involves determination of the orientation of these moments taking into account their influence upon each other and also the influence of the external magnetic flux.

It should be noted that in some solids the electronic structure is very distorted from that of free atoms. In such materials magnetism is discussed using the electronic band structure of the solid, and one refers to "band magnetism" or "itinerant electron magnetism".[8]

The major magnetic forms are paramagnetism, ferromagnetism and diamagnetism.

with m an integer between m = −J and m = J and g the Landé spectroscopic splitting factor. We use Boltzmann statistics to state the probability that a magnetic moment has this energy is proportional to exp(-E/kBT), where kB is the Boltzmann constant and T is the absolute temperature. Summing over the allowed values of magnetic moment, the magnetization in the direction of the magnetic field is found to be:[10]

with N the volume density of atoms, J the angular momentum quantum number, and

known as the Brillouin function, with argument x given by:

In most cases, H is the externally applied field, but in some cases an internal field contribution is present, complicating the energy spectrum.

The outline of paramagnetism above ignores all magnetic interactions between atoms, and makes them all act individually.[11] A natural question is: if the torque aligning atoms is due to the magnetic field in the atom's vicinity, shouldn't the field include the effect of the neighboring atoms upon the field?

Such a modified theory was proposed by Pierre-Ernest Weiss by introducing the notion of a molecular field, a magnetic field contribution that was proportional to the magnetization in the vicinity of an atom:[12]

where HW is the "Weiss field" and γ is the "molecular field constant". This contribution is added to the applied magnetic field HA to obtain the total field H:

Given a method to determine M from H when there is no Weiss field (no interactions), that is, a function M = M(H), we then find (approximately) with the interactions present:

an implicit determination of M for any given HA. In particular, if we adopt the approach based upon the Brillouin function BJ as a function of

all that is needed is to replace H with the modified H above that includes the Weiss field.

This approach has some application to those paramagnetic and ferrimagnetic materials that are ionic solids with localized moments.[13] It doesn't work for ferromagnetic materials because most are metals with itinerant (not localized) electrons, and because these materials exhibit spontaneous magnetization without any need for an applied field. 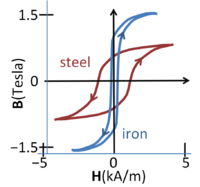 (CC) Image: John R. Brews
Magnetic flux density vs. magnetic field in steel and iron; the curve depends upon the direction of traversal, the phenomenon of hysteresis

The basis for cooperation between atomic magnetic moments is that electrons obey the Pauli exclusion principle that no two can occupy the same quantum state. That means configurations with aligned spins are energetically favored over misaligned spins by an exchange interaction, favoring magnetization. Technically speaking, the Pauli principle requires a spatial part of the wavefunction that is antisymmetric for parallel spins, which keeps the mutually repulsive electrons apart, lowering their interaction energy. In some cases, the balance with the change in kinetic energy favors the antiparallel case (antiferromagnetism), but in ferromagnetism the parallel configuration is favored.[14] The same idea underlies Hund's rules for atoms, namely, other things equal, electrons in atoms populate states to maximize their total spin. Not addressed here is the unanswered question: why do ferromagnetic materials profit from this effect more than other materials?[15]

The figure shows magnetization curves for two different ferromagnetic materials. Notice that H=0 does not mean B=0, or vice versa. The curves exhibit hysteresis, that is, the curve is history dependent and, in particular, depends upon the direction in which the magnetic field increases. This complex behavior indicates that magnetization in such materials is not an equilibrium process. Larger samples break up into magnetic domains or sub-regions of different magnetization directions separated by domain walls.[16] The magnetization curve is affected (in part) by the change in size of the various domains as they reluctantly adapt to changes in the external field.[17] At high H-fields, the curves saturate as the domains aligned with the field dominate, and may coalesce into a single monodomain.

Today it is still impossible to predict from first principles that iron is ferromagnetic.[18] However, some guidance can be obtained as to which metals are candidates, and which are not, based upon estimates of how exchange energy varies with atomic radii and spacing. "The theory of magnetism in solids is one of the central challenges in condensed matter physics, intrinsically involving many-body correlations, long range order and phase transitions..."[19]

Diamagnetism is the reduction within a material of an external magnetic flux by the reaction of the material. The perfect diamagnetic material is the superconductor, which completely suppresses the magnetic field inside itself in what is called the Meissner effect.[20] Unlike the other examples of magnetic behavior considered here, superconductivity is the consequence of macroscopic currents, not atomic level magnetic moments.

All materials exhibit diamagnetism, but it ordinarily is so weak that it is apparent only in materials where no other form of magnetic behavior is evident, like the noble gases or some diatomic gases .[21]

In principle, the magnetic flux density B can be found by observing the force F on a test charge of size q moving with velocity v using the formula:

With B in hand, the magnetization could then be determined from Maxwell's equations using:

where j is the sum of conduction and polarization current densities. In practice, things are done differently. The magnetic field or magnetic intensity H is introduced with the definition:[22]

It is useful to note that, unlike B which has zero divergence,

which is not zero unless it happens that divM = 0.[23] In addition, B and H satisfy different conditions on boundaries between media.

The magnetization M is calculated in terms of H using a so-called constitutive relation calculated by the techniques of condensed matter physics. The simplest example calculates the magnetic susceptibility χm defined as:

(which is dimensionless) and a magnetic permeability by:

whereupon the magnetic flux density is determined as: