Gas stoichiometry is the quantitative relationship between the reactants and products in chemical reactions that produce gases. Gas stoichiometry applies when all of the gases involved in a chemical reaction (either reactants or products) may be assumed to be ideal, and the temperature and pressure of the gases are all known. Often, but not always, the reference conditions used for gas stoichiometric calculations are taken to be a temperature of 0 °C and an absolute pressure of 1 atm.

In 1792, the German chemist Jeremias B. Richter first proposed the concept of the quantitative mass relationships that exist between the chemicals involved in chemical reactions:[1]

In German: Die stöchyometrie ist die Wissenschaft die quantitativen oder Massenverhältnisse zu messen, in welchen die chymischen Elemente gegen einander stehen." (In English: Stoichiometry is the science of measuring the quantitative proportions or mass ratios in which chemical elements stand to one another.)[2]

He named this quantitative study of chemistry to be "stoichiometry", from two Greek words meaning to measure the magnitude of something that cannot be divided.[3]

Gas stoichiometry calculations solve for the unknown volume or mass of gaseous products and/or reactants involved in chemical reactions by using, for the most part, the ideal gas law.[4][5] 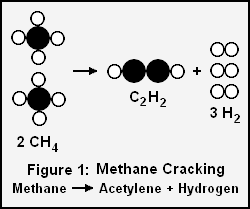 For example, if we want to determine the volume of acetylene and hydrogen gases produced by cracking 100 grams of methane gas as per this chemical reaction:

There is a 2 to 1 molar ratio of methane (CH4) to product acetylene (C2H2) in the above cracking reaction, so 3.117 moles of acetylene will be formed.

The molar ratio of methane to product hydrogen (H2) in the above cracking reaction is 1 to 1.5, so 9.351 moles of hydrogen will be formed. Again using the ideal gas law, the volume of hydrogen formed at 0 °C (273.15 K) and 1 atmosphere will be:

The parameters in the above equations are: 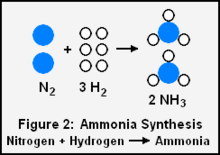 As another example, if we want to determine the amounts of nitrogen and hydrogen gases required to produce 5 kg of ammonia gas per this chemical reaction for the synthesis of ammonia:

The ideal gas law and the universal molar gas constant can again be used to solve for the volume of nitrogen at 0 °C (273.15 K) and 1 atmosphere:

Note that in this example, as well as the previous example, that volume ratios are equal to molar ratios.