From Citizendium
(Redirected from Galileo)
Jump to navigation Jump to search 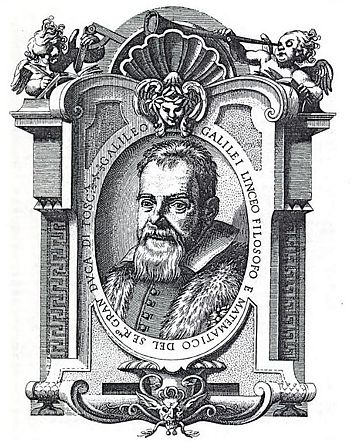 Galileo Galilei (1564-1642) was an Italian scientist who was a major figure in the Scientific Revolution. He was a pioneer in the modern combination of mathematical theory with systematic experiment in science.

His work in physics included experimentation to establish the behavior of falling bodies, as well as the first modern theoretical work on inertia (for which he was given credit by Newton) and relativity of motion (for which he was credited by Einstein).

He was one of the first astronomers to use a telescope, and the discoverer or co-discoverer of several phenomena that contradicted the accepted ideas of the heavens. His support of the Copernican idea that the Earth revolves around the Sun led to a trial before the Inquisition on a suspicion of heresy.

Among the figures of the scientific revolution Galileo occupies a high position because of his pioneering use of quantitative experiments with results analyzed mathematically. There was no tradition of such methods in European thought at that time; the great experimentalist who immediately preceded Galileo, William Gilbert, did not use a quantitative approach. (However, Galileo's father, the musician Vincenzo Galilei, had performed experiments in which he discovered what may be the oldest known non-linear relation in physics, between the tension and the pitch of a stretched string.)

In the 20th century the reality of Galileo's experiments was challenged by some authorities, in particular the distinguished French historian of science Alexandre Koyré. The experiments reported in Two New Sciences to determine the law of acceleration of falling bodies, for instance, required accurate measurements of time, which appeared to have been impossible with the technology of 1600. According to Koyré, the law was arrived at deductively, and Galileo's experiments, reported in some detail as if actually performed, were merely illustrative thought experiments.

Later research, however, has validated the experiments. The measurements on falling bodies (actually rolling balls) were replicated using the methods described by Galileo,[1] and the precision of the results was consistent with Galileo's report. Later research into Galileo's unpublished working papers from as early as 1604 clearly showed the reality of the experiments and even indicated the particular results that led to the time-squared law.[2]

In July of 1609 Galileo heard a report that a traveler from Flanders had shown "a glass by means of which distant objects could be seen as distinctly as if they were nearby." This person or another traveler then negotiated with the government of Venice to sell his secret device at a high price. A telescope had in fact been the subject of a patent application the previous year by Hans Lippershey, a Dutch spectacle maker, and had been known for months to Galileo's friend Paolo Sarpi. (Compare the story, found not only in Brecht's play "Galileo" but in some authors claiming to give a historical account,[3] that Galileo attempted to claim full credit for the invention of the telescope.) Without seeing the telescope, Galileo soon figured out how to make a crude one, which was followed by series of improvements, including an 8-power telescope and one of 20 power, probably in November of 1609.[4]

Before the start of 1610 Galileo was using his telescopes to observe the Moon and stars.[5] He soon saw that the line of shadow separating the light and dark sides of the moon (the terminator) was highly irregular and moved in an irregular fashion, leading to the conclusion that the surface was rough, contrary to the unanimous belief at that time that all heavenly bodies were perfectly spherical and smooth. By measuring shadows he estimated the height of lunar mountains with reasonable accuracy, and noted that they seemed to be higher than terrestrial ones.[6]

In January 1610 Galileo discovered Jupiter's four largest satellites (moons): Io, Europa, Ganymede, and Callisto. Over the succeeding months he was able to determine the orbital periods of the satellites, and he made additional observations to determine the periods more accurately in 1620. (Later astronomers overruled Galileo's naming of these objects, changing his Medicean stars to Galilean satellites.) The demonstration that a planet had smaller planets orbiting it was problematic for the orderly, comprehensive picture of the geocentric model of the universe, in which everything circled around the Earth.[7]

Galileo noted that Venus exhibited a full set of phases like the Moon. This would be impossible if both Venus and the Sun were in orbit around the Earth, but follows logically if both planets orbit the Sun. (It is also consistent with the system of Tycho Brahe in which planets orbit the Sun, which orbits the Earth.)

Galileo made some of the earliest observations of sunspots, although not the very first. A dispute over priority in the discovery of sunspots led to a long and bitter feud with Christoph Scheiner; in fact, there can be little doubt that both of them were beaten by David Fabricius and his son Johannes. And even before that, there were Chinese reports of sunspots. Galileo and Scheiner, however, were the first to make and record systematic observations, concluding, for instance, Galileo that the Sun rotates on its axis.

Blemishes on the Sun were another observation that was repugnant to the philosophy of the time. And the annual variations in the motions of the spots, first pointed out to Galileo by Francesco Sizzi, presented great difficulties for either the geocentric system or that of Tycho Brahe.

While Galileo's application of mathematics to experimental physics was innovative, his mathematical methods were the standard ones of the day. The analyses and proofs relied heavily on the Eudoxian theory of proportion, as set forth in the fifth book of Euclid's Elements. This theory had become available only a century before, thanks to accurate translations by Tartaglia and others; but by the end of Galileo's life it was being superseded by the algebraic methods of Descartes.

Galileo produced one piece of original and even prophetic work in mathematics: Galileo's paradox, which shows that there are as many odd numbers as there are whole numbers including both even and odd. Such seeming contradictions were brought under control 250 years later in the work of Georg Cantor.

In biology Galileo contributed what is probably the earliest quantitative law, the Square-cube law. This law, part of his work on the strength of structures in Two New Sciences, states that the weight of a structure increases with the cube of the size when it is scaled up, while the strength of its supporting members increases only as the square. Hence, a large organism (like any other structure) will collapse of its own weight if simply made larger without change in its shape.[8]

Relations with the Church

During the second half of his life Galileo, a practicing Catholic, had many problems with important figures in the Catholic Church, including a sainted Cardinal, members of the Inquisition, and two Popes. There were periods in which peace and good will prevailed, and Galileo had at all times many friends and supporters in the Church; but the outcome was a conflict that became legendary. Nearly every aspect of this conflict has been and remains the subject of controversy, often bitter. A relatively brief summary of the events and their historical background will be given here, followed by a more extensive treatment in several sections.

The heliocentric idea—that the Earth moves around the Sun, rather than the reverse—contradicts what is perfectly obvious to anyone who looks at the skies. Where the idea existed at all, it was often treated as irreligious; the Greek philosopher Aristarchus, as a result of his advocacy of the idea, was accused of atheism. In Christian Europe the problem was aggravated by the perceived contradiction between heliocentrism and some passages in the Bible; moreover, heliocentrism was against the teachings of Aristotle, whose work was dominant among the learned and was the official basis of Catholic philosophy. When Copernicus first published his heliocentric system in 1543, it was considered a fairly obscure matter and raised little trouble; but in the next century it became the source of much conflict.

After 1610 the discoveries that Galileo and others made using the telescope demonstrated that many of the accepted ideas of astronomy were factually wrong. These findings made heliocentrism more plausible and in some ways provided direct support for it, though not rigorous proof. Galileo began publicly arguing for heliocentrism at this time and was promptly attacked on religious grounds—by philosophers as well as clerics. (There was also scientific controversy; his main argument for heliocentrism is in fact wrong, while he rejected Kepler's cogent point. On both scientific and religious grounds Galileo had many supporters, both within and outside the Church.) Hostile responses ranged from a fiery sermon on the text, "Ye men of Galilee, why stand ye gazing up into heaven?"[9] to direct complaints to the Inquisition. Such attacks were serious, potentially backed by the power of the Church to enforce doctrine.

In 1616 Galileo went to Rome to argue against the banning of Copernican teachings. This mission (often called the first trial of Galileo, although it was not a trial in any formal sense) was a failure. In the end, the heliocentric works of Copernicus and others were temporarily suppressed pending theological "corrections"; a book by the priest Paolo Antonio Foscarini, arguing that heliocentrism was not in conflict with Christianity, was formally banned; and Galileo was directly ordered not to "hold or defend" the Copernican ideas.

Until 1624 Galileo avoided any dangerous public involvement with heliocentrism. In that year the new Pope, Urban VIII, who was an admirer of Galileo's work, approved his writing a book about the theory, on condition that it would not argue that Copernican ideas were true, but merely give both sides. Galileo necessarily accepted the condition, but it is clear that the resulting work is not neutral, but takes the Copernican side.

In 1630 Galileo completed the book, the Dialogue Concerning the Two Chief World Systems, and submitted it to the Congregation of the Index for approval to publish. The process was long and difficult and required changes to the book before the license could be issued. When finally published in 1632, the book immediately encountered determined opposition. Galileo was ordered to go to Rome to be questioned by the authorities. In 1633 he was tried by the Inquisition on "grave suspicion of heresy" and on charges that he had disobeyed the orders given him in 1616. He was convicted, forced to recant his ideas, and placed under permanent house arrest. (The story of his saying "But it does move!" refers to this proceeding.) His Dialogue was banned, and somewhat later all his works were banned.

The suppression of heliocentric books began to be relaxed in 1741, and was finally completely removed in 1822. In 1994 Pope John Paul II issued a formal statement that cleared Galileo of the taint of heresy. The Pope's position, though widely accepted and welcomed, is now the occasion for some controversy, even within the Church.

Opening of the controversy