Euclid's Elements is the oldest systematic treatise on Euclidean geometry. For more than twenty centuries the Elements was the major textbook model in the study and teaching of mathematics in the West. Also in other fields Euclid's work led the way. The philosopher Spinoza wrote his work Ethics along the lines of the Elements and so did the physicist Newton when he composed his opus magnum Principia.

The Elements is often considered as one of the documents, next to the Bible, that had the most impact on the Western culture. However, according to modern mathematical standards of rigor, the Elements show some shortcomings. These have been repaired as late as the 1890s by the German mathematician Hilbert.

The work consists of thirteen Books.

Book I starts with definitions of the type: a point is that which has no part and: a line is a breadthless length. (Most of the other books begin with their own collections of definitions.) It then goes on to the formulation of the five postulates of Euclidean geometry:

After these come axioms or common notions, such as "Things that are equal to the same thing are equal to each other."

The first 26 propositions (theorems or constructions) are based on the first four of the above postulates, and treat mainly congruence of triangles and of other geometric figures. After the parallel postulate is first used, the subject largely shifts to parallelograms. 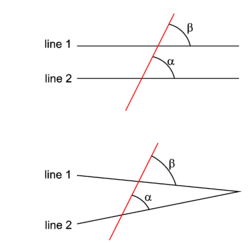 CC Image
Euclid's parallel axiom. In the upper figure the angles α and β are equal. In the lower figure β > α.

One of the most famous propositions is the sixteenth which states that the exterior angle of a triangle is greater than either remote interior angle. See the lower part of the figure on the right, where angle β is larger than angle α by virtue of Euclid's sixteenth proposition.

For many centuries workers have tried to prove the fifth postulate from the other four, but all attempts failed. Indeed, a geometry—a non-Euclidean geometry—without this postulate is possible and logically consistent (in contrast to, for instance, Immanuel Kant's view, who gave a philosopher's proof of the necessity of Euclidean geometry).

Another famous proposition in Book I is number 47: the Pythagorean theorem, which is proved by a technique still used in high school texts. This is followed by its converse, which ends Book I.

Book II is on geometrical algebra. All quantities in Book II are handled geometrically. Numbers are represented by line segments and products of numbers by areas. Most of division is postponed to Book V.

Book III is about circles, chords, inscribed angles and so on.

Book IV deals with figures inscribed in and circumscribed about circles. For example, triangles, squares, regular pentagons and hexagons.

Book V is probably the most important of the books. It is based on Eudoxus' work on proportions. It is about ratios, including incommensurable ratios, but avoids irrational numbers by an ingenious method. The ratio a/b is said to be the same as the ratio c/d if ma >, = or < nb according as mc >, = or < nd, respectively. The approach covers proportions for all kinds of magnitudes. Book V proves twenty-five theorems about magnitudes and ratios of magnitudes.

Book VI, about similar figures, uses the theory of Book V. It gives the solution to the general quadratic equation with positive discriminant.

Book VII deals with theory of numbers, i.e. whole numbers. It covers divisors and multiples, and develops a theory of ratio and proportion of such numbers independently of Book V. This is because the method of proof used in Book V assumes quantities are divisible.

Book VIII continues the treatment of number theory with coverage of geometric sequences and of square and cube numbers.

Book IX continues these topics and also brings in prime numbers, and odd and even numbers. It concludes with the proof that, if a power of 2 is 1 more than a prime number, then the product of that prime number and the previous power of 2 is a perfect number.

Book X classifies many types of irrationals—magnitudes incommensurable with given magnitudes.

Book XI deals with basic solid geometry, a solid being that which has length, breadth and depth. Surfaces are the extremities of solids. Discussed are, among others, pyramid, prism, sphere, cone, cylinder, cube, the regular octahedron, and the regular icosahedron.

Book XII treats the method of exhaustion, the word stemming from the seventeenth century when exhaustion was the immediate forerunner of integration. This method is also due to Eudoxus. Circles, spheres, cones and cylinders are treated as limits of polygons and polyhedra.

Book XIII deals with the five regular solids. It shows how to construct them, inscribed in spheres, classifies the ratios of the lengths of the sides of the regular solids inscribed in the same sphere by the system of Book X, and proves there are only five.

The thirteen books of the Elements contain about 467 propositions (theorems or constructions); the exact number is somewhat uncertain as various ancient editors "improved" the text.