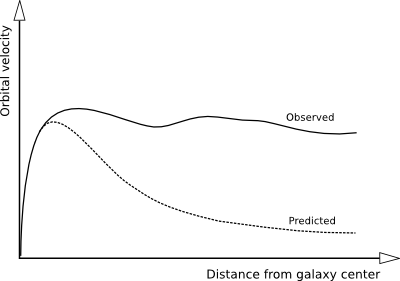 Rotation curve of a typical spiral galaxy: predicted and observed.

The galaxy rotation problem is this discrepancy between the observed rotation speeds of matter in the disk portions of spiral galaxies and the predictions of Newtonian dynamics considering the visible mass. This discrepancy is currently thought to betray the presence of dark matter that permeates the galaxy and extends into the galaxy's halo.

If a spiral galaxy faces us approximately edge-on, matter on one side will move towards us due to the galaxy's rotation, while matter at the other side will be moving away from us. This movement can be seen in the galaxy's spectral lines which will have different Doppler shifts when different parts of the galaxy are analyzed. Taking into account the redshift induced by the cosmological expansion, the shifts of the spectral lines can be used to calculate orbital velocities.

The rotation curve obtained in this way can provide information about the mass distribution of the galaxy. A test particle of mass

on a circular orbit with radius

, has an inward acceleration

Using Newton's second law and the expression for the gravitational force, this leads to the equation

, this provides us with the following estimate of

, the galaxy mass within a radius

History and description of the problem

In 1978, the first observational evidence was reported that spiral galaxies do not spin as expected according to Keplerian dynamics.[1] Based on this model, matter (such as stars and gas) in the disk portion of a spiral should orbit the center of the galaxy similar to the way in which planets in the solar system orbit the sun, that is, according to Newtonian mechanics. Based on this, it would be expected that the average orbital speed of an object at a specified distance away from the majority of the mass distribution would decrease inversely with the square root of the radius of the orbit (the dashed line in Fig. 1). At the time of the discovery of the discrepancy, it was thought that most of the mass of the galaxy had to be in the galactic bulge, near the center.

Observations of the rotation curve of spirals, however, do not bear this out. Rather, the curves do not decrease in the expected inverse square root relationship but are "flat" -- outside of the central bulge the speed is nearly a constant function of radius (the solid line Fig. 1). The explanation that requires the least adjustment to the physical laws of the universe is that there is a substantial amount of matter far from the center of the galaxy that is not emitting light in the mass-to-light ratio of the central bulge. This extra mass is proposed by astronomers to be due to dark matter within the galactic halo, the existence of which was first posited by Fritz Zwicky some 40 years earlier in his studies of the masses of galaxy clusters. Presently, there are a large number of pieces of observational evidence that point to the presence of cold dark matter, and its existence is a major feature of the present Lambda-CDM model that describes the cosmology of the universe.

Having been important in convincing people of the existence of dark matter, recent work on galaxy rotation curves provides some of its greatest challenges. Detailed investigations of the rotation curves of low surface brightness galaxies (LSB galaxies) in the 1990s[2] and of their position on the Tully-Fisher relation[3] showed that these did not behave as expected. These galaxies had to be dominated by dark matter in precisely the correct mix to make them fall on the same Tully-Fisher relation as high surface brightness galaxies. However, the Modification of Newtonian Dynamics (MOND) theory did predict this result.

Further challenges to dark matter theory, or at least its most popular form - cold dark matter (CDM), came from analysis of the centres of low surface brightness galaxies. Numerical simulations based on CDM gave predictions of the shape of the rotation curves in the centre of dark-matter dominated systems, such as these galaxies. Observations of the actual rotation curves did not show the predicted shape.[4]

However, the evidence for dark matter is no longer solely that from rotation curves. It has been uniquely successful in simulating the formation of the large scale structure seen in the distribution of galaxies and in explaining the dynamics of groups and clusters of galaxies (as originally proposed by Zwicky).

The problems with dark matter noted above have led to a number of attempts to find alternative explanations. One of the most discussed alternatives is MOND (Modified Newtonian Dynamics), originally proposed as a phenomenological explanation back in 1983 but which has been seen to have predictive power in the rotation curves of LSB galaxies. This posits that the physics of gravity changes at large scale but, until recently, was not a relativistic theory. However, this has now changed with the development of the tensor-vector-scalar gravity (TeVeS) theory[5] and scalar-tensor-vector gravity (STVG)[6]. None of these alternatives is yet considered by the astronomical community to be as convincing as the dark matter model [7].