Dark matter (DM) is aptly labeled: It is theoretical matter that can not be directly studied and observed by current technologies because it neither emits, absorbs, nor reflects light and appears to interact with other matter only gravitationally. As such it is presumed to exist from indirect evidence. Normal, luminous matter by contrast, composes everything commonly observed in the universe: interstellar gas and dust, galaxies, stars, planets, moons, comets, asteroids, essentially what we consider to be observable in various states.

In the past few decades there has been mounting evidence that there is not enough matter in the universe to account for the amount of gravity needed to hold galaxies together. Its presence may also be inferred from the motions of astronomical objects. It would also help to explain the gravity necessary to amplify the small fluctuations in the Cosmic Microwave Background (CMB). CMB fluctuations are thought to be a reason for the large-scale structures in the universe

These problems and their possible solution have led to the idea that there is dark matter that can not be observed directly in any known spectrum. And there seems to be a great deal of this dark matter. It appears that most of the matter in the Universe is invisible dark matter.

Dark matter would not be made of quarks as is ordinary matter: If there were enough quarks to compose dark matter then the early universe would have had to produce more helium and deuterium than could possibly exist. Possible types of DM are:

CDM move at slower speeds and have lower pressure than HDM

Research in particle physics has led to the theory that dark matter is composed of supersymmetric particles. They are very heavy but they are weakly attracted to each other.

Knowing how much dark matter is present in the universe would also help to solve the questions surrounding the observed expansion of the universe and indicate its geometry. [1][2][3][4][5][6]

Fritz Zwicky (1898-1974) was an astronomer at California Institute of Technology. Zwicky and colleague Walter Baade were among the first to suggest that ultradense neutron stars were an evolutionary stage following supernovae,[7] which were in turn a source of cosmic rays.[8] Zwicky's studies of galaxy clusters led to the observation that the velocities of galaxies within the Coma cluster were higher than predicted. At the observed velocities, it seemed reasonable that the cluster should simply have dispersed. Further data Zwicky derived from other clusters, reinforced his suspicions leading him to infer that there must be more to galaxy clusters. something he described as "an internal viscosity due to the gravitational interactions of its component masses is so high as to cause it to rotate like a solid body." He labeled this "dark matter," in a paper he published in 1933. [9][6]

Zwicky later predicted in 1937 that dark matter in sufficiently large bodies would act as gravitational lenses; when they passed between the Earth and stars, the light of the star would appear to shift position and brighten due to the gravitational effects on light. [10][11]

Vera Rubin (born 1928), an astronomer at Carnegie Institution, Washington, made further observations in the 1970s that lent credence to the theory Zwicky had proposed. While studying the nature of light (spectrograph) of galaxies, she found that contrary to Newtonian laws of gravity, stars in galaxies did not orbit as expected. Newtonian physics predicts that stars on the outside edge of a spiral galaxy would orbit slower than stars in the center of that galaxy. This is similar to the way planets orbit the sun. What Vera Rubin discovered is that stars orbiting the outside of a spiral galaxy are orbiting as fast as stars near the centre. One way to explain this is that there is an invisible mass that exerts the gravity necessary to hold the galaxy in such a stable orbit pattern. Further, her work led her to posit that 90% of the universe is made of this dark matter.[12]

Evidence to support the theory of Dark Matter

Observations in 2006 at the Kavli Institute for Particle Astrophysics and Cosmology (KIPAC), [13]of a galaxy cluster 3 billion light years away, have encouraged some astronomers to assert they have actually seen dark matter. 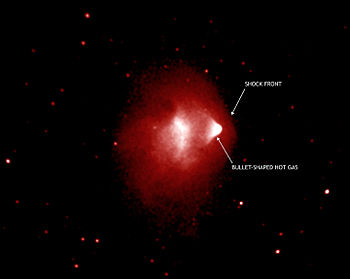 Chandra x-ray image of the two galaxy clusters in collision.

Observers employing x-ray images of luminous matter in what has been perceived as a single “bullet cluster” have observed the collision of what is now thought to be two clusters of galaxies crossing each other at about 10 million miles per hour (approximately 16 million kilometers per hour). From x-ray images of the bullet cluster astronomers surmise that the reason for the shape is attributable to the wind produced by the high speed collison of the two clusters.

These observations and accompanying analysis indicate the direct detection of independent dark matter and luminous matter. The visible luminous matter is congregated in a region separate from the invisible dark matter. 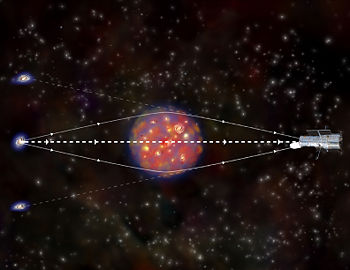 Phenomenon of gravitational lensing employed to ascertain total mass of the bullet cluster.

These distortions were measured through the Hubble Space Telescope, the Magellan Telescopes and the Very Large Telescope. Maps of the location of the bullet cluster were compared with x-ray images of the luminous matter acquired through the Chandra X-ray Observatory, an observatory in space. These comparisons indicated four separate groups of matter, two of dark matter and two of luminous matter trailing the dark matter. 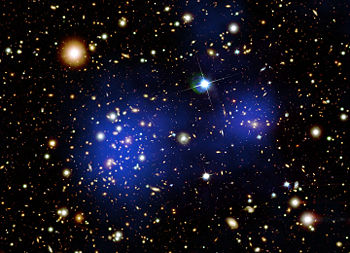 The existence of the dark matter is assumed from the spatial separation while the behaviour of the two types of matter indicate their different characteristics.

The findings from this new evidence provide a reasonable expectation that Newtonian gravity takes place on a galactic scale.