From Citizendium
(Redirected from Doppler shift)
Jump to: navigation, search

The boat going to sea is running at velocity v in the opposite direction to the waves, and toward the source of the wind. Consequently the boat moves relative to the crests at a speed v+c. That means a crest is met at intervals of time τ :

In other words, the frequency with which the boat bumps over a crest fb is: 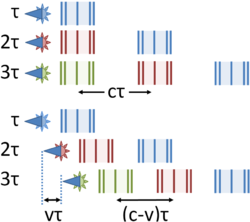 One might think it immaterial whether the source approached the observer, or the other way around. However, it is not that simple.

and a Doppler shift fd of

If the source moves as fast as the pulses, so v=c, this frequency becomes infinite, and the interpretation is that the source cannot emit a pulse in the forward direction because it always is moving ahead of the pulse.

In the general case, the observed frequency fo is related to the emission frequency of the source fe as:

When vo and vs are both much smaller than c, as is typically the case, a useful approximation is

It would appear that careful observation of the Doppler effect could distinguish between movement of the source and that of the observer. But if they are in uniform straight-line motion toward one another, should it be possible to distinguish which object was moving? The answer is "yes, we can tell the difference" in the case where a medium is involved like air or water, because the medium introduces a third reference frame, and the discussion above is made in the frame of the medium. However, in the case of light in a classical vacuum, according to special relativity one cannot detect the medium, so the Doppler shift cannot be given by the above formula.[3] The idea resolving this paradox was pointed out by Einstein; time dilation: when the source or the observer moves, their internal clocks slow down, an effect noticeable as speeds approach the speed of light. In the case of light, the Doppler effect cannot distinguish whether the source or the observer is moving, only that they are approaching each other or separating from each other. Consequently light in classical vacuum is a special case.[4]

An interesting corollary of special relativity is that there is a transverse Doppler effect for light emitted in vacuum, that is, a Doppler effect is present even for an observation perpendicular to the motions of source or observer, sometimes called the second-order Doppler effect because it is of second order, varying as (v/c)2 (c the speed of light in classical vacuum).[5]

As for binary stars, the case considered by Doppler, as the stars orbit each other, they are alternately moving toward and away from the observing astronomer, so the frequency of the light from each star (its color) alternates as well.[7] A Doppler effect is seen for stars even when they are in a plane perpendicular to the line of sight, because of the transverse Doppler effect predicted by special relativity.[5] In this example, the light always propagates in the same direction, and only the separation of the observer and source is changing.