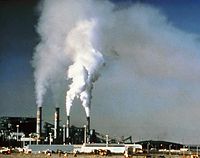 Most fossil fuels are combusted with ambient air (as differentiated from combustion with pure oxygen) and this article is based on the use of ambient air as the combustion air.

Since ambient air contains about 79 volume percent gaseous nitrogen (N2)[2], which is essentially non-combustible, the largest part of the flue gas from most fossil fuel combustion is uncombusted nitrogen. The next largest part of the flue gas is carbon dioxide (CO2) which can be as much as 10 to 15 volume percent or more of the flue gas. This is closely followed in volume by water vapor (H20) created by the combustion of the hydrogen in the fuel with atmospheric oxygen. Much of the 'smoke' seen exiting from flue gas stacks is this water vapor forming a fog cloud as it contacts cool air and condenses into water.

A typical flue gas from the combustion of fossil fuels will also contain some very small amounts of nitrogen oxides (NOx), sulfur dioxide (SO2) and particulate matter.[1] The nitrogen oxides are derived from the nitrogen in the ambient air as well as from any nitrogen-containing compounds in the fossil fuel. The sulfur dioxide is derived from any sulfur-containing compounds in the fuels. The particulate matter is composed of very small particles of solid materials and very small liquid droplets which give flue gases their smoky appearance.

The steam generators in large power plants and the process furnaces in large petroleum refineries, petrochemical and chemical plants, and incinerators burn very considerable amounts of fossil fuels and therefore emit large amounts of flue gas to the ambient atmosphere. The table below presents the total amounts of flue gas typically generated by the burning of fossil fuels such as natural gas, fuel oil and coal. The data in the table were obtained by stoichiometric[3] calculations.[4] 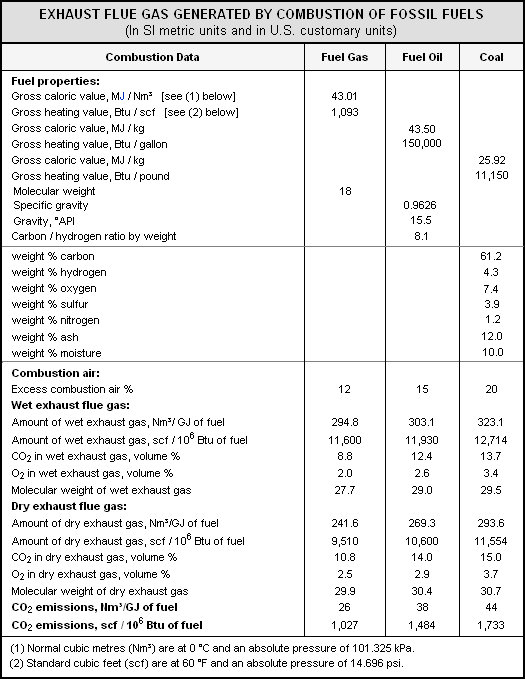