This article is about Diamond (gemstone). For other uses of the term Diamond, please see Diamond (disambiguation). 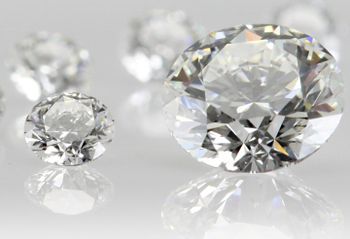 Diamonds cut and polished for use as gemstones.

Diamond, a type of precious gemstone made from carbon, is the hardest naturally occurring substance found on Earth. Diamonds are regarded for their brilliance and their hardness in terms of both appearance and utility. They are naturally formed from amounts of highly compressed carbon found below into the Earth's mantle (roughly 160 km below the surface), and are brought into the crust by explosive volcanic eruptions. They are typically found in kimberlites (a mixture of different kinds of volcanic rock) within ancient volcanic conduits exposed by erosion.

A diamond's strength comes from the crystal lattice; that is, the spatial arrangement of carbon atoms, and not from the carbon itself. Its crystal structure is face-centered cubic (fcc). Graphite, which is the stable form of carbon at surface conditions, is very soft and malleable. In a diamond, each carbon atom (neutral carbon has six protons and six electrons; four of the electrons are in the valence shell), shares all of its valence electrons with a neighboring carbon atom, forming a structure called a covalent bond. Trace elements may be present and affect the outcome and strength of the composition. The constitution of these trace elements also determines their color, which is proportional to their inherent value and utility.

Synthetic diamonds, created by man-made processes, can be formed in a high-temperature, high-pressure chamber that replicates the geologic conditions which produces them.[1] Synthetic diamonds are used in industrial applications, such as abrasives.

The exact quantifiable hardness of a diamond is difficult to measure. Although it scores 10 on the Mohs' scale of hardness, a diamond's strength can only be measured by itself, as only a diamond can scratch another diamond.

Diamonds can be found in these colors: "clear" (or white), yellow, brown, green, pink, blue and very rarely, red. "Raw" diamonds only slightly resemble a finished diamond: there may be a hint of color or a small section that is crystallized.