In geology, a rock is a natural aggregate of minerals. Rocks constitute the lithosphere, that is, the part of our planet below the soil. 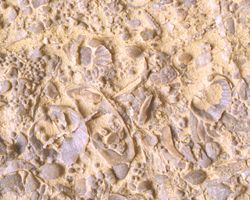 Hand sample of a sedimentary rock. This sample comes from the Carnian (Upper Triassic) of the Dolomites, and is better described as a oolitic/bioclastic grainstone, a kind of carbonate rock. The small spheres in the rock are oolites, all other elements are fossils. Among others, brachiopods, molluscs and echinoderm fragments are recognizable in this picture. It is typical of many carbonate rocks to be composed mainly by fossil shells.

Rocks can be classified based on their origin. There are thus three main groups of rocks:

Most chemical rocks are produced by precipitation of calcium carbonate from seawater supersaturated with respect to CaCO3. This process is responsible for the formation of most limestones.