Christiaan Huygens (IPA: [ˈhaɪgənz] in English, [ˈhœyɣəns] in Dutch; The Hague, 14 April 1629 – The Hague, 8 June 1695), son of Constantijn Huygens, was an internationally renowned Dutch mathematician, physicist and astronomer. He discovered Saturn's rings and its moon Titan, and invented the pendulum clock, which greatly improved time-keeping in astronomy. He is also known for his optical theories. In June 1663 he became a member of the British Royal Society. From 1666 to 1681 Huygens lived in Paris as a member of the Académie des Sciences, founded by Jean-Baptiste Colbert. In 1681 he moved back to The Hague where he lived until his death. 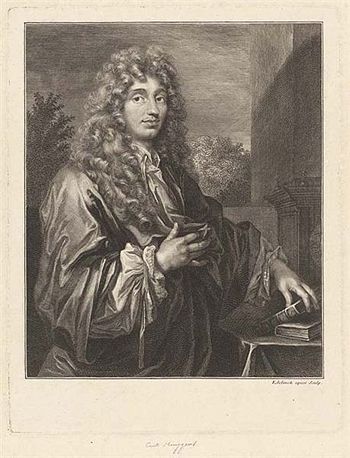 Christiaan Huygens, engraving by Gerard Edelinck (1686) after a painted portrait by Caspar Netscher (1671).

Christiaan was born in The Hague to a patrician family. His father, Constantijn, was a Secretary and Counsellor to two Princes of Orange, Frederik Hendrik and Willem II, and his mother, Suzanna Van Baerle, came from one of the richest burgher families in Amsterdam. When Christiaan grew up his father gained him access to the top scientific circles of the times. In particular, Constantijn had many contacts in England and was a personal friend of René Descartes, who resided in the Netherlands from 1629 until 1648. Tutored at home by his father and private teachers until he was 16 years old, Christiaan learned arithmetic, Euclidean geometry, classical and modern languages, and music. His mathematical education was clearly influenced by Descartes.

Christiaan Huygens studied law and mathematics at the University of Leiden from 1645 until 1647. Frans van Schooten, one of the prominent mathematicians of his time, tutored him in mathematics while he was in Leiden. From 1647 until 1649 he continued to study law and mathematics but now at the Collegium Arausiacum (College of Orange) at Breda. Through his father's contact with Marin Mersenne, a correspondence between Huygens and Mersenne began around this time, and although this correspondence did not last long—Mersenne died in 1648— it was of great importance to the young Huygens. In 1655 Huygens went to Angers, France, to buy an LL.D. (Doctor of Law) degree, as was not unusual in those days, but he never used the title.

In the first part of his career Huygens was mostly engaged in mathematics; his first publications (1651 and 1654) considered mathematical problems. The 1651 publication Theoremata de Quadratura Hyperboles, Ellipsis et Circuli showed that Gregorius a Sancto-Vincentio, who had claimed to have squared the circle, was mistaken. Huygens' 1654 work De Circuli Magnitudine Inventa was a major work on similar topics. Huygens' work in those days mainly concerned the problems of rectification, quadrature and cubature, determination of the center of gravity, determination of tangents of curves, and extrema. These were all problems that later were to be solved by general differential and integral calculus methods, but before the invention of the infinitesimal calculus, they had to be tackled individually. This work made him the leading figure among the European mathematicians of the mid-seventeenth century.

Later Huygens dedicated himself to experimental and especially mathematical physics – primarily mechanics and optics. Huygens continued the development of classical mechanics started by Galileo by his research on falling and colliding bodies and pendulum and circular motion. By means of his theory of the physical pendulum he made a beginning with the dynamics of the solid body. He formulated and used the relativity principle of classical mechanics (the so-called Galileo relativity principle) and—by generalization of a statistical axiom of Torricelli—he arrived at the principle of conservation of mechanical energy in the homogeneous field of gravity.

The theory of the pendulum motion had a technical counterpart in the construction and patenting of the first pendulum clock (1656), which considerably improved time-keeping. This invention instigated new theoretical investigations and technical improvements and variants: for example, the introduction of a balance wheel and spring in pocket watches. The aim was mainly to improve of time- keeping at sea, thus enabling a better determination of the geographical longitude; but also work in astronomy required accurate timekeeping. Huygens believed that a pendulum swinging in a large arc would be more useful at sea and he invented the cycloidal pendulum with this in mind. Several of his clocks underwent sea trials in 1662 and again in 1686, but it turned out that his clocks were not sufficiently insensitive to the ship's motions. In the Horologium Oscillatorium sive de motu pendulorum (1673) he described the theory of pendulum motion. This work shows that Huygens had moved far from Descartes' influence. He also derived the law of centrifugal force (the term was coined by him) for uniform circular motion. This result of Huygens', together with Kepler's third law, gave rise to the formulation of the inverse-square law of gravitational attraction by Christopher Wren, Robert Hooke, and above all Isaac Newton.

Huygens was also involved in lens grinding, telescope and microscope construction. Around 1654 he devised, in cooperation with his oldest brother Constantijn Jr., a new and better way of grinding and polishing lenses. In 1655, using one of his own lenses, Huygens discovered Titan, the first detection of a moon of Saturn. He also observed that the planet is surrounded by rings that two centuries later were shown by Clerk Maxwell to consist of solid particles orbiting the planet. In Systema Saturnium (1659), Huygens explained the phases and changes in the shape of Saturn's rings. In the field of optics Huygens was involved not only in the practice but also in the geometric theory of lenses. He studied spherical aberration and in 1662 invented the ocular named after him.

In 1655 Christiaan made his first visit to Paris, where he learned of the work on probability carried out by Blaise Pascal and Pierre de Fermat. On his return to Holland Huygens wrote a small work in Dutch, which was translated into Latin as De Ratiociniis in Ludo Aleae ('The Reckoning in Games of Chance), on the calculus of probabilities, the first printed work on the subject.

He further developed a mechanistic theory of light, in which the propagation of light was considered as an extension of a collision in a subtle medium (ether). This collision theory is often described as an undulation or wave theory, but this should not be interpreted as a propagation of vibrations. Huygens’ light theory is based on a general principle, named after him. In the nineteenth century his collision theory of light was transformed into a vibration theory that dominated the whole of nineteenth-century optics.

In 1661 Huygens visited London, particularly to find out more about the newly forming Royal Society meeting at that time in Gresham College. While in London Huygens saw Robert Boyle's vacuum pump and he was impressed. After his return to the Hague he carried out a number of Boyle's experiments for himself. Huygens improved Boyle's air pump and used it for many experiments. He also tried to build an engine fueled by gunpowder, but never successfully completed one.

Huygens was elected to the Royal Society of London in 1663.

In 1666 Huygens accepted an invitation from the minister of finance, Jean-Baptiste Colbert, in the government of the King of France Louis XIV to take part in the founding of the Académie Royale des Sciences. This academy had just been conceived by Colbert, who was inspired by the foundation of the Royal Society of London in 1660. Huygens arrived in Paris in 1666 when the Society was not yet organized. After several meetings were held in Colbert's library, the Society moved to the Bibliothèque du Roi where Huygens took up residence. He assumed leadership of the group, basing much on his knowledge of the way the Royal Society operated in England.

From his youth Huygens' health had never been robust and in 1670 he had a serious illness which resulted in him leaving Paris for Holland. By 1671 Huygens returned to Paris. In 1672 Louis XIV invaded the Low Countries and Huygens found himself in the extremely difficult position of being in an important position in Paris at a time France was at war with his own country. Moreover he felt obliged to dedicate his 1673 Horologium to the King of France, who was paying him handsomely as a member of the Académie Royale. This dedication to their enemy was not well received in his native country. However, natural philosophers of this era felt themselves above politics and Huygens was able, with much support from his friends, to continue his work.

In 1672 Huygens and Gottfried Wilhelm Leibniz met in Paris and thereafter Leibniz was a frequent visitor to the Académie. In fact Leibniz owes much to Huygens from whom he learned much of his mathematics. In this same year Huygens learned of Newton's work on the telescope and on light. He criticized Newton's theory of light, in particular his theory of color.

Another bout of illness in 1676 saw Huygens return to the Hague again. He spent two years there, in particular studying the double refraction that the Danish physician Erasmus Bartholin had discovered in the Iceland spar crystal. He also worked on the speed of light that he believed to be finite, as Galileo had believed before him, but in contrast to Descartes' view, who thought it infinite. He heard of Ole Christensen Rømer's observations in Paris of the moons of the planet Jupiter, which gave a very reasonable (by modern standards) value for the speed for light.

By 1678 Huygens had returned to Paris. In that year his Traité de la lumiere appeared, in which he presented his wave theory of propagation of light. That year his health became even more unreliable and he became ill in 1679, again forcing him to return temporarily to The Hague.

Huygens became ill again in 1681 when he returned to The Hague for good. The tolerance of Protestants in Roman Catholic France had deteriorated after Colbert's death (1683), culminating in the revocation of the Edict of Nantes by Louis XIV in 1685. The hostile climate made Huygens (who, although formally a Protestant, was not very religious) decide not to return to Paris. In addition, he had ran into some political problems at the Académie, which also made it less appealing for him to go back.

The geographical longitude problem had remained a constant reason for Huygens to continue work on clocks all his life. Again, after his health returned, he worked on a new marine clock during 1682 and, with the Dutch East India Company showing interest, he worked hard on the clocks.

In 1689 Huygens visited England and the Royal Society where he met Isaac Newton. It is known that the two great scientists traveled together by stagecoach from Cambridge to London, but it is not known what the two great minds conversed about during the long (almost 100 km) journey. Huygens recognized Newton's genius, but frowned upon his theory of gravitation, based as it was on action at a distance. Huygens still had enough of Descartes' influence left in him to loathe this concept.

In the final years of his life Huygens composed one of the earliest discussions of extraterrestrial life, published after his death as the Cosmotheoros (1698).

Huygens was the greatest mechanist of the seventeenth century. He combined Galileo's mathematical treatment of phenomena with Descartes' vision of the ultimate design of nature. Beginning as a Cartesian who sought to correct the more glaring errors of the Cartesian system, he ended up as one of its sharpest critics. The ideas of mass, weight, momentum, force, and work were finally clarified in Huygens' treatment of the phenomena of impact, centrifugal force and the first dynamical system ever studied—the compound pendulum.