From Citizendium
(Redirected from Beta-adrenergic antagonist)
Jump to: navigation, search 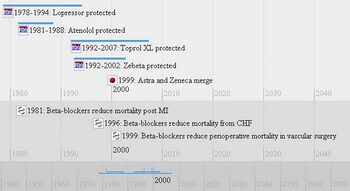 Adrenergic beta-receptor blockaders (beta-blockers) are "drugs that bind to but do not activate beta-adrenergic receptors thereby blocking the actions of beta-adrenergic agonists. Adrenergic beta-antagonists are used for treatment of hypertension, cardiac arrhythmias, angina pectoris, glaucoma, migraine headaches, and anxiety".[1]

Beta-blockers vary within the class regarding their properties. Beta-blockers that have low intrinsic sympathomimetic activity (ISA), low membrane stabilizing activity, high beta 1-selectivity, and high lipophilicity may be more effective.[2]

Generically available beta-blockers, which subclassify based on selective aspects of their action, include: include:[3][4][5]

They further divide by frequency of dosing, cost, and other factors.

Generic beta-blockers with selectivity for the beta-1 adrenergic receptor:[4][8]

Propranolol was developed by James Black who later received the Nobel Prize for this and other work.[11]

Beta-blockers may have reduced effect due to inability to lower central blood pressure as well as other antihypertensives.[12]

The pharmacogenetics of beta-blockers have been reviewed.[13]

Genetic polymorphisms of beta-1 (ADRB1) may affect the response to adrenergic beta-antagonist treatment of heart failure.[18]

Single-nucleotide polymorphism of the beta-2 (ADRB2) adrenergic receptor, specifically c.46G>A and c.79C>G of the four SNPs studied, may affect the response to adrenergic beta-antagonist treatment of acute coronary syndrome.[20]

Genetic polymorphisms of alpha-2C (ADRA2C) may affect the response to adrenergic beta-antagonist treatment of heart failure.[21]

Beta-blockers such as metoprolol that are metabolized by cytochrome P-450 CYP2D6 allele and may have more drug interactions[22] and inherited variations in metabolism.[23]

Although poor metabolism due to CYP2D6 polymorphisms may be present in patients with drug toxicity due to metoprolol[24], small studies suggest that careful, slow titration [25][26] and avoidance of other drugs metabolized by CYP2D6[27] may avoid drug toxicity from polymorphisms of cytochrome P-450.

The effect of adrenergic beta-antagonists on heart rate may be more predictive than the amount of drug in predicting the drug's benefit[33] or harm[34]. This may be due to invidual molecular variations in adrenergic receptors, G-protein-coupled receptor kinases, and metabolism by cytochrome P-450.

The individual beta-blockers have been compared in the treatment of various diseases.[35]

Adrenergic beta-antagonists were first shown to be effective in 1981.[40]

Adrenergic beta-antagonists do not definitely reduce short term mortality while in the hospital (see evidence table), but may improve long germ mortality.[36][38]. Metoprolol may[2] or may not[38] be the best beta-blocker for secondary prevention of myocardial infarctions according to meta-analyses of randomized controlled trials.

Cohort studies suggest that atenolol may[41] or may not[42] be better than other adrenergic beta-antagonists.

Two cohort studies suggest that atenolol and carvedilol may be more effect than metoprolol for the treatment of heart failure.[45][46]

Drugs with intrinsic sympathomimetic activity may have less benefit[38] A systematic review of randomized controlled trials concluded "metoprolol, carvedilol, and bisoprolol all exhibited statistically significant mortality rate reductions compared with placebo, the data were inconclusive for nebivolol or atenolol" and "for every heart rate reduction of 5 beats/min with β-blocker treatment, a commensurate 18% reduction in the risk for death occurred."[33]

Beta-blockers may[47] or may not[48] be a good first choice medication in treating hypertension - at least for patients without coronary heart disease. A meta-analysis[34] and accompanying editorial[49] have concluded that the more the drug lowers the heart rate, the lower the benefit of the drug. The harm may be confined to elderly patients.[50] Alternatively, or in addition:

Additional physiologic problems with beta-blockers are:[53]

Beta-blockers may be less effective than diuretics in the treatment of elderly patients with hypertension due to reduced ability to prevent coronary heart disease.[54]

Cocaine abuse is thought to be a contraindication, but the association between beta-blockers and adverse events among cocaine users is not certain.[55]