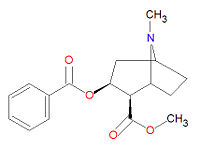 Cocaine or benzoylmethyl ecgonine (IUPAC name methyl (2R,3S)-3-(benzoyloxy)-8-methyl-8-azabicyclo[3.2.1]octane-2-carboxylate) is an organic chemical compound that belongs to the alkaloid category. Its chemical formula is C17H21NO4. Cocaine is a colorless or white crystalline substance. It is primarily extracted from coca plant, largely grown in South America.

Cocaine is primarily used recreationally for its stimulating and euphoric effects on human body. Due to its abuse, the possession, production and distribution of cocaine has been declared illegal by most countries. In the United States, it is classified by the Controlled Substance Act as a Schedule II substance, allowing only limited medical use. Along with heroin and methamphetamine, cocaine is often considered a "hard drug", being much more physically addictive and harmful than a so-called "soft drug" like marijuana. Despite harsh penal codes against the consumption, production, and distribution of the drug, a black market is still flourishing. Street names for cocaine include coke, snow, and blow, among others.

Cocaine was first refined from raw coca in 1860 by Albert Niemann, a German graduate student working under Friedrich Wöhler in Göttingen University. In the decades after its original isolation, cocaine was used as an experimental drug in a wide variety of clinical applications by researchers including Sigmund Freud. [1] It soon came to be used in a variety of commercial products including some that were very popular, including Vin Mariani and Coca Cola. Cocaine production was seen as a significant economic resource and a modernizing export in Peru. It was not until after World War I that U.S. pressure abroad made cocaine an illicit product on the international stage.

The majority of cocaine's effects are due to increasing monoamine levels by binding to serotonin (5-HT), norepinephrine (NE), and dopamine (DA) catecholamine plasma membrane transport proteins. This blockade prevents the reuptake of neurotransmitters, thus increasing the amount available at the synapse to bind to the post synaptic cell. In contrast to amphetamine, a similar psychomotor stimulant, cocaine is a dopamine uptake inhibitor and does not stimulate DA release.[2] Cocaine's rewarding effects come primarily from increased activity in the mesolimbic dopamine pathway.[3] The three most common routes of administration for cocaine are intravenous, smoked and intranasal. All three routes appear to exert the same phamacological effect, and differ only in the speed of entrance into the brain.[4]

Cocaine has an anesthetic effect by inhibiting voltage-gated sodium (Na+) channels in nerve cells. These channels are essential in generating action potentials, and their blockage prevents nerves from transmitting information. Topical anesthetics have been developed from cocaine's structure to take advantage of this particular property.

Cocaine can cause coronary artery spasms which lead to a myocardial infarction. This effect can happen randomly to any user. The coronary artery spasms can occur on the users first usage or any other usage after. The coronary spasms cause the ectopic ventricular foci of the heart to become hypoxic and the extreme irritability can trigger life-threatening ventricular arrhythmias. The risk of myocardial infartion increases 24 times the normal risk during the first hour after use of cocaine.

The most up-to-date information about Cocaine and other drugs can be found at the following sites.