An atom (from the Greek atomos, indivisible)[1] [2] is the smallest physical entity (particle) that can represent a chemical element—that retains the properties of a sensible/tangible piece of a chemical element—elements which nature has produced more than 90 different species (e.g., copper, gold, aluminium), each characterized by a species-specific number of protons in their atoms' nuclei, and by a species-variable number of atom varieties (called isotopes), each isotope characterized by an isotope-specific number of neutrons in their atoms' nuclei. Atoms of the chemical element, carbon, for example, each contain six protons in their nuclei, but differing numbers of neutrons, most carbon atoms containing six neutrons, though about 1% of them contain seven neutrons, and tiny fractions of about a dozen other varieties of carbon atoms contain fewer and greater numbers of neutrons than 6-7.[3]

Atoms serve as the building blocks of all the matter that we come in contact with on a daily basis, solids, liquids and gases; matter composed of a single or assorted combinations of chemical elements; matter that can undergo spontaneous chemical change; matter that chemists can, through chemical reactions, manipulate to produce all of the synthetic products that humans use.

Those facts and potentialities derive from the atomic hypothesis, first proposed by the ancient Greeks (5th century BCE: Leucippus[5], Democritus[6]) and first established on an experimental and quantitative basis in the early 1800s by the English scientist, John Dalton.

Atoms were once thought to be the fundamental building blocks of the entire universe. We now know, however, that atoms are made up of a few smaller subatomic-particles, the same set of which, in differing combinations, make up all the different chemical elements. Many of the chemical elements have non-stable, so-called radioactive isotopes, whose atomic nuclei emit matter and energy.

The ancient Greek (5th century BCE[5] [6]) idea that all matter in the universe consisted of tiny indivisible entities had no empirical support at the time. Much later the English polymaths, Robert Boyle (dates) and Isaac Newton (1643-1727) championed the idea and added to the argument—as "corpuscularism".

The search for the most fundamental entities in the universe has remained one of most important driving forces in science to this day.

The particles that today bear the name "atom" were first encountered by early chemists who discovered that they could not reduce them to a more 'elementary' substance by chemical methods.

The modern atom serves as the fundamental particle for chemistry and as the smallest stable structure for engineering. Nuclear energy is generated either by breaking an atom into two or more smaller atoms (fission), or by combining two smaller atoms into a larger one (fusion).

History of the Atom

In the beginning of the nineteenth century men such as John Dalton, Joseph-Louis Gay-Lussac and Amedeo Avogadro hypothesized that matter consists of minute particles, atoms as Dalton liked to call them, or molecules (a term preferred by Avogadro and already used by Lavoisier). However, the difference between the two concepts was not clear. One of the main topics of the first international chemistry conference, the historic 1860 Karlsruhe conference, was to clear up the confusion about the difference between atoms and molecules. Stanislao Cannizaro offered for the first time in the history of science, a very clear definition of atoms as distinguished from molecules. To him the atom was the smallest quantity of each element which enters as a whole into the molecules which contain it. His statements represented a most remarkable contribution to the clarification of the issues debated at the time concerning the relations between atoms and molecules in both organic and inorganic compounds.

Employing the kinetic theory of heat and a mathematical approach to changes in velocity characterized by random motion, in 1905 Albert Einstein gave a convincing account of the microscopically observable random motion of pollen particles suspended in a liquid, previously noted by the botanist Robert Brown, attributing the motion to random collisions of the pollen particles with the molecules of the liquid in thermal motion. [11]

The first widely accepted model of the atom was J.J Thomson's Model of a positively charged cloud with negatively charged "corpuscles," electrons, interspersed throughout. Thomson proposed and searched for configurations for which these particles had normal modes of vibration and were stable. He built his model using only electrostatic forces, which required that the electrons be in constant motion, this led to further difficulties and he was never able to create a model that matched observed data.

Ernest Rutherford, one of Thomson's students, disproved his theory in his now famous scattering experiment by showing that there was a dense, positively charged core at the center of each atom. Rutherford postulated that the structure of an atom more closely resembled a solar system with the nucleus at the center and electrons orbiting around it. Unfortunately, Classical Mechanics predicts that these orbits would be unstable, they would decay in less than a microsecond, while emitting a continuous spectrum of light. However, it was already known that each element emitted a unique spectrum of discrete lines. Rutherford could not explain why these orbits did not decay nor why atoms did not emit the continuous spectrum that these decays would have caused.

Bohr's model of the Hydrogen Atom

In 1913 Niels Bohr[12] devised the first quantum mechanical model of a (one-electron) atom.[13] He resolved the difficulties of Rutherford's model by making the non-classical assumption that there were only discrete and stationary energy states allowed for the electron. Further, Bohr conjectured that the angular momentum of each electron was constrained to be a positive integer times Planck's constant h divided by 2π. Since in Bohr's model electrons can only make jumps between the stationary states, the atomic spectral lines were explained by the discreteness of the energy differences of the states. Emission of a photon occurs when an electron falls down from a state with energy E2 to a state with lower energy E1. The frequency ν of the emitted photon is given by

Absorption of a photon of energy hν occurs when hν "matches" an atomic energy difference. An atom in a certain state jumps to a state of higher energy such that the energy difference is equal to hν. Clearly, this requirement puts a strict constraint on the frequencies of the photons that may be absorbed by the atom.

For most practical purposes Bohr's model has proven an acceptable approximation. However, the quantum mechanical interpretation is that the electrons are spread out in various probability distributions around the nucleus rather than actually orbiting it.

Structure of the Atom

Atoms are made of a dense nucleus formed by combinations of the two nucleons (positively charged protons and zero charge neutrons) and surrounded by a much larger "cloud" of electrons. The vast majority of the volume of an atom is empty space. The number of protons contained in the nucleus determines the atomic number and in turn which element it is classified as. The number of neutrons further specifies the isotope number of that element. The number of electrons surrounding the nucleus is typically assumed to be equal to the number of protons in order to keep the entire atom electrically neutral. Atoms that are not neutral are called ions, they are designated by their charge in units of elementary charge, which is equal to the negative of the number of surplus electrons present around the atom. Thus an atom with one extra electron is charged -1, and one missing is charged +1.

Forces in the atom

The nucleus of the atom contains a high concentration of positively charged particles with no counter balancing negatively charged particles to keep it stable. In order to explain the existence of the nucleus scientists introduced the two nuclear forces, the strong force and the weak force. We now understand that the nucleus is held together by the residual strong force despite its significant positive charge. The electrons which surround the atom are electro-statically attracted to the nucleus due to their negative charge. 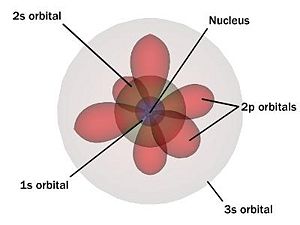 © Drawing: Courtesy of HowStuffWorks.com
Modern concept of the quantum atom

Electrons surround the nucleus of an atom, where each is in a unique quantum mechanical state in the atom's structure. These states of well defined energy are called atomic orbitals and are organized from the lowest energy to highest. Each orbit can be uniquely defined by four quantum numbers: 'n' the shell, 'l' the angular momentum, 'm' the magnetic angular momentum, and 's' the spin. Shell numbers can only be natural numbers but no shell number over 7 has ever been observed. Each shell has n² spatial orbitals which are grouped by angular momentum 'l' into subshells. These subshells are often given the names 's', 'p', 'f', 'g', and 'h' rather than numerals. Each of these subshells contains ((2*l)+1) suborbitals 'm' which are numbered (−l...,0,...l). Finally, each suborbital can contain two electrons of different spin

. For a total of 2n² electrons per shell.

The valence, or the highest energy shell which contains electrons, is responsible for most of an elements chemical properties.

An atom with electrons in higher energy states without first filling lower states is considered "excited" and is likely to emit this excess energy in the form of a photon of energy equal to the difference between the current state and a lower energy state until it is no longer excited. These emissions are responsible for the emission and absorption spectra that atoms produce. In fact it is this property that allows us to discern the composition of stars and planets from a great distance.

The nucleus of an atom itself also has a shell like behavior not dissimilar to electron shells. This leads to some extra stable and semi-stable states when the number of protons or neutrons in the nucleus is equal to the "magic numbers" 20, 28, 50, 82, and 126 which is believed to correspond to complete shells. [14] Stable nuclei fall upon a "line" of stability which starts very close to equal numbers of protons and neutrons and move towards favoring neutrons for heavier nuclei. This is a result of the fact that the electrostatic repulsion of two protons drops in magnitude much more slowly than the residual strong force. Either way nucleons strongly prefer to bond in even numbers.

Most combinations of nucleons are inherently unstable and undergo a number of radioactive decays in order to form more stable nuclei. In all of the common decays a particle is emitted from the nucleus in order to compensate for some instability in the atom.