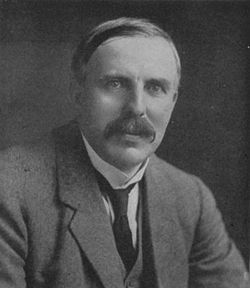 Ernest Rutherford (Sir Ernest Rutherford, 1914-1931; Lord Rutherford, 1931-7; born August 30, 1871, Nelson, New Zealand and died October 19, 1937, Cambridge, England) was the first person to employ the means to actually transmute an atom of one element to that of another and as the world’s first successful “alchemist,” confirmed that nitrogen was transmuted into oxygen[1]. He postulated the existence of the proton and the neutron, naming them both, and provided the first nuclear model of the atom. He discerned that radioactivity is the product of subatomic change and thereby ended the chapter on Aristotelian physics which held that all matter is immutable and unchanging. He discovered and named alpha and beta particles emitted by radioactive materials, discovered radon (a radioactive gas), tritium (3H) and 3He. Through his work and calculations of radioactive decay he coined the phrase half-life and provided definitive evidence for the extreme age of the Earth.

His list of practical applications is equally as impressive. He invented the first Geiger Counter with Hans Geiger (actually it was the Geiger-Rutherford detector of single ionizing particles). He built one of the first radio receivers and at one time held the world record in distance over which `wireless' waves were detected, designed a time-apparatus capable of measuring time intervals of a hundred-thousandth of a second, designed and built the first modern smoke detector, as a pioneer in acoustic submarine detection, with W H Bragg, patented the first apparatus for determining the direction of submarine sound.

His list of students includes many of those who made some of the most remarkable breakthroughs in science, including Niels Bohr, Robert Oppenheimer, today known as the "father of the atomic bomb, James Chadwick, the discoverer of the neutron which Rutherford predicted, and John Douglas Cockcroft and Ernest Thomas Sinton Walton who pioneered work on the transmutation of atomic nuclei by artificially accelerated atomic particles.

He was Professor of Experimental Physics at McGill University in Montreal from 1898-1907.[2] He was awarded the Nobel Prize in Chemistry in 1908

Ernest Rutherford is buried at Westminster Abbey just west of Sir Isaac Newton's tomb and next to Lord Kelvin’s.

Between 1906 and 1909, Rutherford, Hans Geiger and Ernst Marsden conducted diffraction experiments using a sheet of gold foil through which were fired alpha particles (helium nuclei containing two positive charges)[4][5]. On the opposite side of the gold foil was a zinc-sulfide screen which would emit a flash of light when struck by the alpha particles. They expected that some of the alpha particles would be slightly deflected and thereby strike the zinc-sulfide screen at slightly varied angles from the point of emission due to repulsion by weak charges in the gold atoms. What they discovered were very large angles of diffraction and in some cases the alpha particles were bounced back in the direction they came from.

Alpha particles are approximately 8000 times as massive as an electron and would strike the foil at very high velocities. The severe angles and the backscatter made it clear that there were very strong forces present to create such drastic deflection. Rutherford's theory to explain this was that most of the mass of an atom is in a compact nucleus with a positive charge and electrons filled the bulk of the atom's space in orbit around the nucleus.

If the atom is composed largely of empty space, Rutherford postulated that most of the alpha particles would pass through without deviation from their straight trajectory. Only those that directly collided with the massive nucleus were deflected or scattered backwards. With this model he significantly changed the model of the atom.[6][7]

Rutherford Model of the Atom

Prior to Rutherford’s work on the model of the atom, the prevailing model was Thomson’s "plum pudding" model. Thomson’s model held that positive and negative charges were evenly distributed in a sphere, not unlike raisins in plum pudding. Rutherford’s Gold Foil experiments, which showed what is commonly called Rutherford Scattering, indicated that rather than an even distribution, the atom was largely empty space with a massive nucleus that held a strong charge. His answer was to postulate a solar system type of model for the atom with negatively charged and very light electrons orbiting a massive, positively charged nucleus. However, as is true to some extent in our solar system, the electron orbits are not limited to an orbital plane.

One problem with this model is that orbiting electrons must by definition be accelerating as they orbit if they are to remain in orbit. In the process of accelerating they must also necessarily radiate energy. This in turn means that charged particles like electrons must lose energy and their orbits would deteriorate and they would spiral into the nucleus. In 1913, Ernest’s postdoc, Niels Bohr improved the model by postulating quantization: the electrons could only lose energy in jumps or quanta so that the electrons cannot lose energy continuously. There are only certain orbits and nothing in between. While the model did not resolve other issues, it had a better correspondence with data known at the time.

Rutherford was born in Spring Grove, near Nelson, on the South Island of New Zealand on August 30 in 1871, just a little over 31 years after the British had preempted the French colonisation of the islands. A first generation New Zealander, his parents were both recent immigrants, as children, from the British isles in one of the first groups to immigrate to New Zealand.

During his progress through school, while he did not distinguish himself as an outstanding scholar, he managed to obtain scholarships to attend Canterbury College in Christchurch. He finished a BA degree in 1892 in an arts and science curriculum and continued to his first MA in 1893. His research for his MA involved magnetic properties of iron which he investigated with high-frequency radio waves, discovered by Heinrich Rudolf Hertz in the late 1880s.

Unable to get a teaching job even with his advanced qualifications he began a second bachelor's degree to qualify for a scholarship in Europe. Rutherford was one of two applying for a scholarship in New Zealand. His competitor, James Maclaurin, won but decided he had better opportunities in New Zealand and Ernst was awarded the scholarship by default to go to Cavendish Laboratory Cambridge University as a research student in 1895.[3]

Ernst's initial research at Cavendish continued his earlier work in radio waves at about the same time Guglielmo Marconi was involved with his experiments in Italy, both achieving transmission distances of about two miles. While Marconi continued his work in this area, Rutherford moved on to research in X-rays in 1896 with J.J. Thomson supervising. By showing that X-rays ionize gases, they succeeded in demonstrating that X-rays are an energetic form of light, that is, electromagnetic waves, as described by James Clerk Maxwell earlier that century.

Rutherford later went on to investigate the radiation discovered by Antoine Henri Becquerel. Rutherford was able to establish preliminary findings that showed Becquerel's radiation had two components (Rutherford later found a third while at McGill University). The first component was what he called alpha radiation which had a short range and could be stopped by a piece of paper or travel no more than just a few centimeters in the air. The other was beta radiation which was far more energetic. Alpha radiation is in fact a stream of particles, as Rutherford discovered later in 1908, helium atoms without their two electrons. Beta radiation is a stream of electrons.

When Rutherford's scholarship at Cambridge expired he left Cavendish in 1898 for a chair at McGill University in Montreal before he had obtained a PhD. His paper on alpha and beta rays was published after he left Cambridge and was working at McGill.[3]