Warfighter Information Network-Tactical (WIN-T) is the evolving United States Army tactical communications network system. Tactical networks do not directly include the radios with individual soldiers and vehicles, but does include their command posts. Its fundamental technology is routing using the Internet Protocol. WIN-T is being deployed in four main "Increments"; about half of the units in the active Army have Increment 1, and Increment 2, in large-scale test, is scheduled to be fielded soon, with Increment 1 units being upgraded. [1] The major difference between Increments 1 and 2 is that Increment 1 is transportable, requiring quick setup at each operating location, while Increment 2 is mobile: able to operate "on the move" (OTM).

An earlier concept, now folded into WIN-T Increment 1, was called the Joint Network Node Network (JNN-N). It forms the Army’s tactical portion of the fixed, long-haul, strategic Global Information Grid (GIG) network, via the Army Battle Command System. WIN-T equipment may make use of commercial or military communications satellites, or the Defense Information Systems Network, or tie into other commercial networks, especially if connecting to the GIG, but will always retain an independent radio-based tactical transmission capability. From a technology standpoint, it will replace existing connectivity equipment such as the general-purpose Mobile Subscriber Equipment (MSE), as well as dedicated networks for intelligence (e.g., TROJAN SPIRIT) and logistics. [2] MSE and the AN/TTC-39 switch were part of an earlier tactical architecture, of less ambitious scope, called TRI-TAC. Some individual pieces of equipment, such as the AN-TTC-56 switch, are transitional between TRI-TAC and full WIN-T.

At least early in the projects, a number of the technologies used either are in commercial use or in other military systems. Others are not mature, but are also advancing in the commercial sector. The prime contractor is a team of General Dynamics C4 and Lockheed Martin. Major subcontractors include BAE Systems, Harris Corporation, L-3 Communications and Cisco Systems.

Besides using the major increments to manage risk, "applique" techniques are used to bring in software upgrades, and small but critical upgrades such as batteries with better power-to-weight ratios. [3] 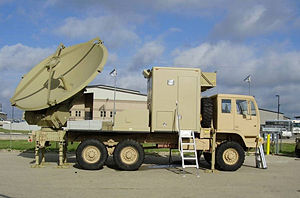 Increment 1 satellite terminal on 5-ton truck
All three types have a satellite terminal. Terrestrial line-of-sight communications between shelters in Increment One is provided by the AN/GRC-245 Enhanced High Capacity Line-of-Sight (HCLOS) radio.

Increment 1 is largely based on the already deployed Joint Network Node, and is seen to be relatively low risk. It contains a number of COTS components, which, according to the General Accountability Office, are added as maintenance updates rather than redesigns: "newer, more capable commercial components replace outdated components as they become available." [5]

According to WIN-T program manager COL William Hoppe, WIN-T Increments Two and Three will bring the initial and full on-the-move capability, where stopping is not required for communications.

Your cell phone is a mobile device, but as soon as you leave the coverage area of your cell phone tower, you drop your signal. That’s Increment One, where you have communications at the halt within a footprint. In Increment Two, we’re going to take that cell tower equivalent infrastructure and we’re going to move it along with the mobile device, so you have communications every place you have your infrastructure.[6]

The type of technology required for the Increment Two capability is, in general communications engineering, called self-organizing or ad hoc networking. Increment One makes considerable use of commercial communications satellites. Increment Two, however, while using commercial capability as an adjunct, will make much more extensive use of military satellites such the Wideband Global Satellite communications system, which had its first operational launch in October 2007. These satellites have approximately 10 times the bandwidth of their DSCS III (Defense Satellite Communications System) predecessors; the WGS can route between 2.1 and 3.6 Gbps of digital information. [7] 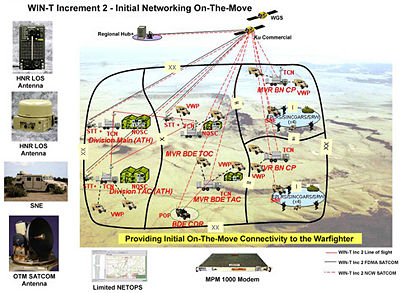 Increment Two is also specifically oriented to the Brigade Combat Team concept in the restructuring of the United States Army. [8] It provides the initial OTM capability. :[9] It uses Highband Network Radios for line of sight, and also interfaces to the vehicle- and unit-level SINCGARS radio. SINCGARS equipment radios will be replaced by waveform-compatible equipment of the Joint Tactical Radio System.

Increment Two also makes use of a technology, similar to used in commercial satellite telephones such as the Thuraya system operating in the Middle East and Africa since 2000, which tie into cellular telephony networks when available, but go to a satellite when no appropriate terrestrial capability is present.[10] 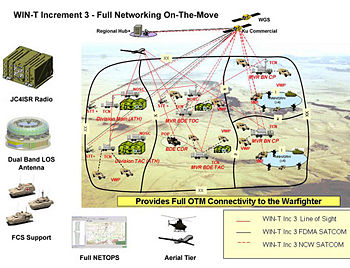 In Increment Three, unmanned aerial vehicle communications relays, as in the MQ-8, will supplement the satellites. These allow operations when insufficient satellite capability is in orbit, or when ground operations are on a part of the earth that is not well covered by satellites (e.g., polar regions), or if an adversary could interfere with or destroy satellites. It was intended to be compatible with the now-cancelled Future Combat Systems, although compatibility will be maintained with its replacement.

Increment Four makes the air and satellite communications relays even more robust against electronic warfare. Hoppe described this as "That’s where we’re taking advantage of the secure anti-jam, low probability detection satellite communications off of things like the Transformation Satellite Communications system into our radio systems".[6] In this increment if not earlier, it will accept traffic from the Global Broadcast Service data and video distribution satellites.

The space segment of Increment Four was to have made use of the five-satellite Transformational Satellite System (TSAT) constellation, using laser rather than radio links to earth, but radio among the satellites. Launches are planned to begin in 2013, [12] although the project is still in a government-funded competitive proposal stage and operational funds have not been committed. On April 6, 2009, Secretary of Defense Robert Gates said that TSAT will be terminated, and two additional Advanced Extremely High Frequency (AEHF) satellites would be purchased; final decisions here will depend on the fate of the new budget in Congress. AEHF operates in a different frequency range and is more resistant to electronic warfare (EW) than the Wideband Global Satellite; TSAT was also to be EW-hardened.