It is a tactical network that allows sharing of this information among appropriate elements in the field, but also provides connectivity to worldwide maximum security networks such as JWICS and specific United States intelligence community networks. While it is tactically used, however, there is a TROJAN Data Network (TDN) operations center at Fort Belvoir, VA, where the central AN/FSQ-144(V) TROJAN CLASSIC equipment is located. There are actually three networks within TDN:

TROJAN SPIRIT is an example of a "stovepiped" system, developed for specific user requirements that could not be met by the general communications systems. As long as security and other operational requirements can be met by enhancing the general systems, the latter approach is desirable, both to reduce costs and to offer the end user more flexibility if the stovepiped equipment is not available. [1]

Its implementation is evolving as part of the restructuring of the United States Army. Within a division, before the full change to Brigade Combat Teams BCT, there are 17 points that need TS/SCI access. It is expected there will be three such points per BCT.[2] 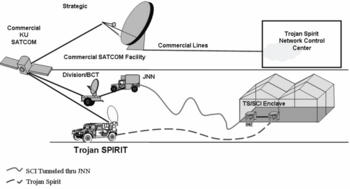 Originally, each TROJAN SPIRIT node had its own AN/TSQ-190(V)[3] satellite terminal; TROJAN SPIRIT had often been considered synonymous with the combination of satellite and ground communications & security equipment.[4]

Over 300 systems are in the field, but the number of new satellite stations is unlikely to increase. With the availability of the Joint Network Node, there would still be a satellite terminal per BCT, but other users in "TS/SCI enclaves" would reach it using secure tunneling through the Joint Network Node. TS/SCI communications require TSEC/KG-175 series (TACLANE) in-line network encryption (INE) devices. These points of access are called WIN intelligence gateways (WIN-IG).

In Bosnia from the mid-nineties, ground stations for the U.S. MQ-1 Predator used TROJAN SPIRIT to send imagery into intelligence networks. The video from this unmanned aerial vehicle was subsequently fed into the Global Broadcast Service communications satellites, to make it available to NATO users that did not have access to compartmented intelligence communications.

TROJAN SPIRIT internally migrated from Asychronous Transfer Mode to Internet Protocol version 4 communications with TROJAN SPIRIT II. To evolve the TROJAN SPIRIT II, the satellite communications had to be upgraded, with more efficient radio modems and TSEC/KIV-19 cryptographic equipment to supplement slower TSEC/KIV-7HS units. These upgrades were selected before the BCT restructuring of the Army, so concentrate on requirements at division, corps, and echelons above corps. [6]

The next step is to integrate TROJAN SPIRIT II with common networks. TROJAN SPIRIT already goes through JNN, and JNN is compatible with Warfighter Information Network-Tactical.