Replacing a wide range of military radios and communications security devices is the Joint Tactical Radio System (JTRS), (pronounced "jitters" by military personnel). JTRS is a large-scale project to deploy software-defined radio (SDR) technology in the U.S. and allied militaries. 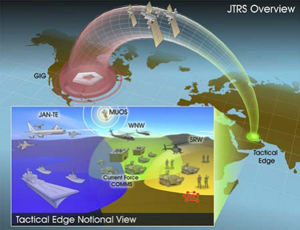 JTRS as the "last mile" of the Global Information Grid

Under the U.S. Department of Defense, the applications that need wireless radio communications connectivity form the Global Information Grid (GIG), with the GIG being transmitted principally over fixed optical networks with massive bandwidth and extremely low error rates. In contrast, the JTRS edge networks will have limited bandwidth and not only electrically noisy environments, but may be under active electronic attack. The edge networks will not only not be fixed, but may be moving at high speed, and the overall networks must be to cope with the occasional exceptionally high speed separation of the pieces of a host or router into a rapidly expanding fireball.

JTRS is the "last mile" that connects the warfighters in the field to one another, and to their fixed facilities. JTRS equipment uses mobile ad hoc networking (MANET) with digital payloads encapsulated in Internet Protocol over a wide range of radio frequencies and waveforms. [1]

Software-defined radio (SDR) is a radical departure from traditional radio, in which many of the discrete electronic components, and even fundamental techniques such as superheterodyne operation, are replaced by computer-controlled digital signal processors.[2]

The proof-of-concept of SDR technology was the Army Special Operations Command AN/PRC-148 inter/intra-team radio for United States Army Special Forces, and the U.S. Army became the executive agent for what was becoming a massive and high-risk program. Versions of this SDR were also deployed by the U.S. Marine Corps in a variety applications, the family being called the Tactical Handheld Radio (THHR).[3] Used, at first, by reconnaissance units, it became an slightly less than 2 pound alternative to the AN/PRC-119, a backpack squad SINCGARS radio weighing approximately 22 pounds with batteries. The Marine vehicle-mounted version of this radio was designated the AN/VRC-111. It has built-in encryption and is interoperable with SINCGARS and HAVE QUICK II in both single-channel and frequency hopping modes.

Even closer to JTRS standards is the AN/PRC-117.

On March 31, 2006, Ken Krieg, undersecretary of defense for acquisition, technology and logistics, changed the program "big bang" procurement to an incremental one, lowering the risk and the capabilities of the radios that will initially be obtained. [4] Still, while interoperability testing has been scheduled, not all the specifications have been set.

Originally, each military service had a separate development program for a group of physical implementations, called a "cluster", with the joint program office in charge of the software communications architecture and software waveforms used by all the radios. Problems with the Army-led Cluster 1 program to develop radios for ground vehicles and rotorcraft forced the restructuring.

At a May 3, 2006 briefing, the JTRS executive officer, said that trying to bring out all the systems at once would take about USD $4 billion more than was in the research and development budget. The new method separated systems into phases based on difficulty, assuming that each new phase would learn from the success of the less complex phases that preceded it. The earlier system put the radios for Army helicopters and Army trucks under the same leadership because they were Army. Unfortunately, that meant five different programs that dealt with helicopters, rather than concentrating the knowledge of radios for flight. Under the new JTRS plan, the groupings are:

These groupings matrix against a set of physical packaging requirements.

Most of the basic electronics of JTRS implementations will be common, but they will vary in form factor, or physical packaging for different applications. 26 different form factors were identified as being in military use, and, with the smaller size and programmability of the JTRS electronics, reduced to 13 form factors:

In electronics, a waveform generically describes the nature of an electronic signal, typically as viewed in the time domain on an oscilloscope. JTRS uses "waveform" in a broader context: "the entire set of radio and/or communications functions that occur from the user input to the radio frequency output and vice versa. JTRS waveform implementation consists of a Waveform Application Code, Radio Set Devices and Radio System Applications. Every waveform involves the tuning of a mobile ad hoc networking "to its peculiar environment. These protocols interact with the IP layers in the radios to hide the network mobility and dynamics from the external commercial-based networking equipment to facilitate interoperability."[1]

Originally, there were 32 JTRS waveforms which have since been reduced to the following list:[6]