From Citizendium
(Redirected from U.S. Army)
Jump to: navigation, search 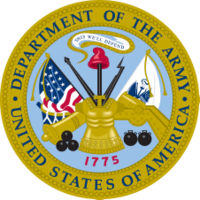 Seal of the United States Army

The Army's official motto is "This We'll Defend."

The United States Army was formed during the American Revolution on 14 June 1775, as "the American continental army," [1] and has been in existence since. The Army's main mission down to 1890 was operating coastal defenses near major harbors, and manning interior forts that dealt with Indians. It fought in foreign conflicts, notably the War of 1812, the Mexican-American War (1846-48), the Spanish-American War of 1898, World War I (1917-1918), World War II (1941-45), the Korean War (1950-53), the Vietnam War (1965-72), and the Gulf War (1990-91), as well as the current Iraq War (2003- ). During the American Civil War the regular army largely remained on the frontier and apart from artillery units played a minor role, as a separate new volunteer army fought the battles.

The Army is part of the Department of Defense. It has a civilian Secretary of the Army, who has the equivalent rank of an Assistant Secretary of Defense, responsible for policy and managerial matters. The Chief of Staff of the Army is not in the operational military chain of command, but serves as a member of the Joint Chiefs of Staff, heads the Army Staff, and is responsible for the preparation and training of the Army.

U.S. Army units either deployed or ready for deployment follow an administrative and operational chain of command, with many commanders wearing "dual hats". Numbered Field Armies are responsible for the readiness and training of combat units. these are pure Army units. Multiservice Unified Combatant Commands control the employment of Army units, alongside units of the other services, while Army commands such as Training and Doctrine Command and United States Army Forces Command prepare and train Army units.

For example, Third United States Army is headquartered at Ft. McPherson, Georgia, but is also the United States Central Command's (CENTCOM) Army Component (ARCENT). Even though CENTCOM is responsible for the Middle East, its main headquarters, to avoid political concerns, is in Tampa, Florida; both CENTCOM and ARCENT have forward headquarters in the theater of operations. ARCENT has also provided the Coalition Forces Land Combat Component, as in the Gulf War, also responsible for direction of U.S. Marine Corps and allied ground forces.

As with any army, it is built around a core of infantry. Current infantry, however, have increasingly sophisticated weapons, command and control and sensors, and are intended to operate in combined arms operations. The U.S. Army is going through a major transformation, in which the Brigade Combat Team, rather than the division, is the basic unit capable of independent action (with suitable reinforcements).

Corps and division headquarters remain, but are flexible organizations with variable numbers of reporting brigades and other units.

All BCT types have vastly more intelligence, surveillance, reconnaissance and target acquisition than ever before deployed to this level; see Reconnaissance, Surveillance and Target Acquisition Squadron and Military Intelligence Company formations for each BCT.

The three main types of BCT are:

The primary individual weapons of the Army are the M16A2/A4 assault rifle [2] and its compact variant, the M4 carbine. [3]

Optionally, the M9 bayonet can be attached to either variant for close-quarters fighting.[4] The 40 mm N203 or M320 grenade launcher can also be attached for additional firepower. Some soldiers whose duties require a more compact weapon, such as combat vehicle crew members, staff officers, and military police, are issued a sidearm in lieu of (or in addition to) a rifle. The most common sidearm in the U.S. Army is the 9 mm M9 pistol[5] which is issued to the majority of combat and support units. Other, less commonly issued sidearms include the M11, used by Special Agents of the CID,[6][7] and the MK23, used by some Army Special Forces units.[8]

In addition to these basic rifles and sidearms, many combat units' arsenals are supplemented with a variety of specialized weapons, including the M249 Squad Automatic Weapon (SAW) light machine-gun, to provide suppressive fire at the fire-team level,[9] the M1014 Joint Service Combat Shotgun[10] or the Mossberg 590 Shotgun[11] for door-breaching and close-quarters combat, the M14 Rifle [12] for long-range marksmen, and the M107 or the M24 Sniper Weapon System for snipers. Hand grenades, such as the M67 fragmentation grenade and M18 smoke grenade, are also commonly used by combat troops.

The Army employs various crew-served weapons (so named because they are operated by two or more soldiers in order to transport items such as spare barrels, tripods, base plates, and extra ammunition) to provide heavy firepower at ranges exceeding that of individual weapons.

A common cradle, which in turn can attach to a vehicle mount or a tripod for dismounted ground use, holds the M2 machine gun, MK 19 automatic grenade launcher or single=tube launcher for the [BGM-71 TOW missile]].

Some M60 machine guns, firing 7.26 mm ammunition, remain in use, but the NATO standard M240 machine gun is the Army's standard medium general-purpose machine gun. The M134 machine gun, with rotating barrels and a much higher rate of fire, is replacing it for some high-volume applications. The M2 .50-caliber heavy machine gun has been in use since 1932 in a variety of roles, from infantry support to air defense. The M2 is also the primary weapon on most Stryker ACV variants and the secondary weapon system on the M1 Abrams tank.

The Army uses three types of mortar for indirect fire support when heavier artillery may not be appropriate or available. The smallest of these is the M224 60mm mortar, normally assigned at the infantry company level. [13]

At the next higher echelon, infantry battalions are typically supported by a section of M252 81mm Medium Extended Range Mortars.

The largest mortar in the Army's inventory is the 120 mm M120/M121, usually employed by mechanized battalions, Stryker units, and cavalry troops because its size and weight require it to be transported in a tracked carrier or towed behind a truck.

The U.S. Army was the first in the world to achieve 100% automotive mobility, and spends a sizable portion of its military budget to maintain a diverse inventory of vehicles. The U.S. Army maintains the highest vehicle-to-soldier ratio in the world.

The Army's most common vehicle is the HMMWV (High Mobility Multi-purpose Wheeled Vehicle), which is capable of serving as a cargo/troop carrier, weapons platform, and ambulance, among many other roles.[14] Complementing this light truck is the Heavy Expanded Mobility Tactical Truck series.

The M1A2 Abrams is the Army's primary main battle tank, [15] while the M2A3 Bradley is the standard infantry fighting vehicle.[16] To save wear on the tracks, the Heavy Equipment Transporter System (HETS) truck and trailer carries tanks to the deployment area.

Other vehicles include the M3A3 cavalry fighting vehicle, the Stryker, [17] and the M113 armored personnel carrier.[18] Potential replacements are in the troubled Future Combat Systems project, and unmanned ground vehicles are being evaluated.

The U.S. Army's principal artillery weapons are the M109A6 Paladin self-propelled 155mm howitzer[19] and the M270A1 Multiple Launch Rocket System (MLRS),[20] both mounted on tracked platforms and assigned to heavy mechanized units. Missiles have replaced all heavier cannon, such as the 8-inch howitzer and 175mm gun. MLRS ammunition, despite the name, consists of short-range guided missiles as well as the MGM-140 ATACMS ballistic missile.

Fire support for light infantry units is provided by towed howitzers, including the 105 mm M119A1[21] and the 155 mm M777 (which will replace the M198).[22] There is a HMMWV-mounted version of the MLRS, the M142 High Mobility Artillery Rocket System (HIMARS).

In the Future Combat Systems (FCS) project are a howitzer, heavy mortar and tactical guided missile. There is also a assault vehicle that brings combat engineer oriented direct fire back to combat units, which was last in the M729 Combat Engineering Vehicle. All of these FCS systems are under review and may be cancelled.

Increasingly, the Army operates unmanned aerial vehicles such as the MQ-8.

Due to its mobile nature, the Army relies heavily on wireless, line of sight, and satellite communications in order to provide commanders in the field with situational awareness and the ability to quickly communicate with their superior officers. The Signal Corps is the sub branch of the Army charged with missions related to communications.

Army, and indeed ground forces communications, are in the midst of transition to a new generation, using the Warfighter Information Network-Tactical (WIN-T) as the inter-unit backbone and link to higher headquarters, and the Joint Tactical Radio System as the "last mile" from WIN-T to the soldier.

The SINCGARS radio is the single most recognizable piece of equipment in Army communications. It is analogous to the HMMWV (High Mobility Multi-purpose Wheeled Vehicle) in terms of how many of them there are in the Army.[28] D