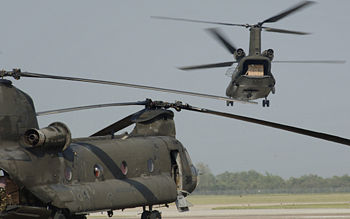 The H-47 or CH-47 Chinook is the current U.S. Army medium lift helicopters, with a distinctive tandem-rotor configuration, is operated by 16 nations. The MH-47 Chinook is a special operations variant.

These helicopters can carry troops, cargo, and small vehicles internally, and larger loads, such as a howitzer, hung from a sling that attaches to the bottom of the helicopter.

In the Tactical Mobility Requirements Board analysis of the potential of helicopter-borne air assault, the ability of the Chinook to move light vehicles and artillery was essential to the success of the AIR ASSAULT II test.

The series is turning into a very long-lived family, like the C-130 Hercules or B-52. Besides the improvements in each new developmental version, there has been a good deal of remanufacturing.

The winner of a 1958 Army solicitation for a medium transport helicopter, the CH-47A preceded the deployment of air assault units in the Vietnam War. A-models were first used there in 1962, but had a critical role in the Howze Board AIR ASSAULT II feasibility demonstration of an airmobile division.

Early production CH-47A’s operated with the 11th Air Assault Division during 1963 and in October of that year the aircraft was formally designated as the Army’s standard medium transport helicopter. In June 1965 the 11th Air Assault Division was redesignated as the 1st Cavalry Division (Airmobile) and readied for deployment to Viet Nam. Chinooks from the 11th Air Assault formed the nucleus of the 228th Assault Helicopter Battalion which began operations in Viet Nam in September, 1965. CH-47A’s deployed to Viet Nam were equipped with Lycoming T55-L7 engines generating 2650 shp. The aircraft had a maximum gross weight of 33,000 pounds allowing for a maximum payload of approximately 10,000 pounds. The hot mountainous conditions of Viet Nam limited the A models performance capabilities and generated a requirement for increased payload and better performance.

In the environmental conditions of Viet Nam, the A model was underpowered. The B model was an interim upgrade, with a more powerful engine and more rugged airframe, with rotor and fuselage aerodynamic changes that improved stability.

First built in 1967, the C model improved performance, with a external load capacity of 20,000 pounds. Again, the engine was upgraded and the structure strengthened. There were also safety improvements, but the B and C models were incremental improvements to the original aircraft. 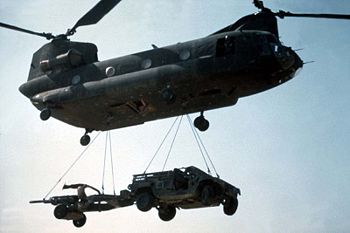 D models resulted from a 1976 contract to modernize the series. The contract started by stripping A, B and C models to the basic airframe, and rebuilding into prototypes. Again, there was an engine upgrade, as well as incremental improvements in the cooling and rotors.

Load capacity is twice that of an A model. Representative internal loads include 33 to 44 troops, or 24 litters plus two medical attendants. It can carry up to 26,000 pounds externally. The CH-47D has three cargo hooks: a center (main) hook and two additional hooks fore and aft of the main hook.

The "left hook" of the Gulf War was paced by the operational radius of a D model, which was the workhorse of forward transportation.

Yet another remanufacturing process upgrade the D model's engine, and rebuilt the airframe to have another 20 years of service, putting the aircraft into the honored few that will be in service past the half-century mark. Both crew and avionics will be happier due to vibration reduction, and the MIL-STD-1533 bus is added to enable integration with a wide range of nondevelopmental avionics, including Force XXI Army digital architecture. Its avionics include a Rockwell Collins Common Avionics Architecture System (CAAS) cockpit and a BAE Digital Advanced Flight Control System (DAFCS). DAFCS provides dramatically improved flight control capabilities through features such as "hover hold," "altitude hold" and "beep down" that improve performance and safety in brownout situations as well as the entire flight envelope. [2]

Improvements for situational awareness center around the MIL-STD-1553 bus, including an advanced digital map display and a data transfer system that allows storing of preflight and mission data. Improved survivability features include the AN/AAR-57 Common Missile Warning and AN/ALE-47 Improved Countermeasure Dispenser Systems.

With a less than dignified name but an essential function, the Fatcow is a CH-47 with the Extended Range Fuel System [ERFS] II system located in the cargo bay. The configuration consists of three or four fuel tanks attached to a refueling system. The system contains 2400 gallons of JP4/8 excluding the CH-47 internal fuel load of 1050 gals. The Fatcow can set up a 1,2,3,or 4 point system using Hot Tactical Aircraft Refueling System (HTARS}.

MH-47C/D/E Special Operations Aircraft (SOA) is a derivative of the Boeing CH-47 Chinook, with extensive modifications to the fuel system, including greater capacity, air refueling (D and E only) and survivability improvements such as inert gas fillers for the fuel tanks. Eventually, all will be E models until remanufacture into the MH-60G.

The avionics have been enhanced for all-weather and night operations. Having a larger special operations helicopter gives United States Special Operations Command the ability to do behind-the-lines deliveries of vehicle-borne teams.

While several Chinooks sank with the cargo ship Atlantic Conveyor, the Chinook was essential to the U.K. operations in the Falklands War.

The amount of load a cargo helicopter can carry depends on the model, the fuel on board, the distance to be flown, and atmospheric conditions.[1] In the high mountains of Afghanistan, these helicopters have done surprisingly well, while lighter helicopters' engines struggle.

CH-47's are in the Aviation Brigade of the new U.S. Army restructuring into brigades.