Paratroop is a designation applied to infantry soldiers or units, trained and equipped to enter combat by parachuting from aircraft. The nature of such operations requires a high degree of confidence and skill, as even under the best conditions when the units can quickly assemble on the ground, they usually operate behind enemy lines, without immediate support from heavier conventional units. They are often limited to portable weapons, or, at best, lightweight support vehicles to tow or mount support weapons.

To military commanders, the limited firepower and logistics of paratroopers are sometimes balanced by their ability to be delivered quickly, with surprise, at virtually any land location.

Conditions have often not been ideal, and fighting, such as in the Battle of Normandy, may be by LGOP's: "little groups of paratroopers", formed by soldiers from different units, who could find one another. Unluckier paratroopers may fight alone.

Other terms for such soldiers and units include airborne infantry, jump-qualified, parachute infantry, amd a wide range of national, local, and informal designations. While paratroop units up to corps size fought in the Second World War,[1], improved air defenses make it unlikely that large combat drops will ever happen; in recent decades, combat jumps have been, at most, of company to battalion strength. Basic and advanced parachuting skills, however, continue to have an important role in special operations.

While parachute-qualified infantry distinctly do not consider themselves "conventional", there are both basic and advanced parachuting skills. The most common mode, for units of any appreciable size, is for soldiers to exit transport aircraft in quick succession. Their parachutes are pulled open by cables, called static lines, which remain attached to the aircraft. 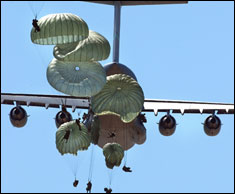 In these operations, the parachute used is designed to get its user quickly to the ground. There is a limited ability to affect the direction toward the ground; typical modern infantry parachutes have two harness straps that connect the jumper to the canopy. By pulling on one side, air spills from that side of the parachute, causing the flight path to move in that direction.

Again with the standard parachute, the term "parachute landing fall" describes the practical means of contacting the ground: it is a survivable fall, and a significant part of parachute training is learning to accept the shock of landing, and then releasing the parachute so the soldier is not dragged by a wind-filled canopy.

For regular parachute units, the most advanced technique is jumping at night. Current night-vision devices make this less risky, but coordination remains a problem.

As opposed to the relatively low altitude and quick landing in basic parachuting, the two main advanced methods are:

HALO and HAHO are not used for large units, but for small special operations teams, or even individuals.