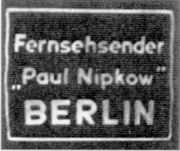 The Paul Nipkow Fernsehsender (TV Station) was the first television station in Germany. It was named after Paul Nipkow, the inventor of the Nipkow disk and was on the air from 1935 until 1944. Regular broadcasts started on March 22, 1935, and its headquarters was in Berlin, Germany. It was managed by Eugen Hadamovsky, who held the title of "Reichssendeleiter" (Reich Production Director), who welcomed viewers by declaring that "In this hour, this broadcast will bring to fruition the largest and holiest mission: to plant in all German hearts the picture of their great leader (Führer)".

Television was not, in fact, invented by Nipkow, although his design of the Nipkow disc was adapted decades after his original (undeveloped) design by British inventor John Logie Baird as the basis of his early televisors. Indeed, the mechanical television system used in Germany was first developed via Baird Television's German affiliate, Fernseh AG. However, in August of 1935, Hitler ordered Fernseh's assets seized by the state, placing them under the direct control of Hermann Goering. Goering, who was very much aware of television's potential propaganda value, arranged for the broadcast of the 1936 Summer Olympics, and oversaw the development of programming which would support the National Socialist cause. The naming of the station after Nipkow was a conscious attempt to re-frame Television as a German invention rather than a British one.

The studios were located in Broadcast House, across from the Berlin radio tower in Adolf Hitler Plaza (the modern Theodor Heuss Plaza) in the Charlottenburg district of Berlin. The station's earliest broadcasts used the old mechanical-television standard of 30 vertical lines, which was based on Baird's system and used Nipkow discs. After a fire at the Berlin Radio Exhibition in August of 1935 which destroyed the equipment, the station was re-established in 1936 using electronic television cameras and a 441-line horizontally-scanned image.

Because of the expense of television receivers, very few were in private homes, and the German Post Office instead established "television parlors" (Fernsehstuben), much like small cinema theatres, throughout Berlin; at their height there were 27 such rooms throughout the city.