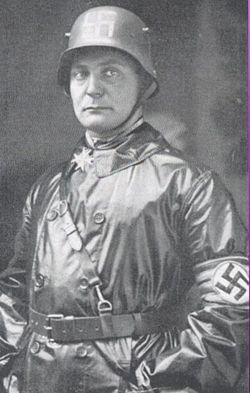 © Deutsches Bundesarchiv
Hermann Göring as SA (Sturmabteilung) Commander in Chief in the 1920s.

Sentenced to death for war crimes in the Second World War, Hermann Goering (1893-1946) was a distinguished First World War German pilot, on whom the highest German decoration, the Pour le Mérite, was bestowed. After World War I, he became a key member of the Nazi Party, eventually rising to be Adolf Hitler's designated successor, holding many offices, key among them being the head of the German air force, the Luftwaffe. While heading Prussia, he created the Gestapa (Geheimes Staatspolizeiamt), the office of secret state police, the ancestor of the Gestapo (Geheime Staatspolizei), secret state police.

During WWII, as Plenipotentiary for the Four Year Plan, he had much authority over the German economy. Goering was fond of collecting additional titles and decorations; he was, for example, the State Master of the Hunt (Reichsjägermeister) and in July 1940 he became Reichsmarschall des Großdeutschen Reiches. As the war progressed and the Luftwaffe had more problems, he withdrew into personal pleasures and took increasingly less of an operational role. He became massively obese, and addicted to paracodeine, prescribed for chronic pain from WWI wounds.

As is corroborated by a letter signed by him,[1] Goering ordered on 31 July 1941 Reinhard Heydrich to make all necessary preparations to the "total solution of the Jewish problem in the territory under German influence" (Gesamtlösung der Judenfrage im deutschen Einflussgebiet) and to work out an overall plan for the "solution" that was to become the Holocaust.

Captured at the end of the war, he was the most senior defendant at the International Military Tribunal in Nuremberg. While awaiting trial, he became drug-free and shed the massive weight. He was aggressive and unrepentant in his defense, and was sentenced to death for war crimes. Shortly before his scheduled execution, he cheated the hangman by committing suicide with a hidden poison capsule.

Goering's Luftwaffe was extremely successful in 1939 and 1940, as well as earlier in the Spanish Civil War. It is not clear, however, if it failed in defeating the British evacuation at Dunkirk, or if it had orders from Hitler to put the brake on.[2] Regardless of the Dunkirk role, however, it had a critical assignment in creating German air supremacy over the English Channel, if the German invasion of Britain, Operation Sea Lion, was to be attempted. In the Battle of Britain, the Luftwaffe failed in that strategic mission, and the invasion was canceled.

Goering had promised that the Luftwaffe, which also controlled the anti-aircraft artillery, would protect Germany from Allied air attack, boasting "if a single British bomb falls on German territory, you can call me Meyer (a common German name)." While the Luftwaffe made allied strategic bombing expensive, it failed completely to stop it especially toward the end of the war; the number of references to Meyer has been so large that they could not be accurately tabulated.