The acceptability of this term is deeply debatable, so I have renamed this Wikipedia article to a more socially and academically acceptable term (also see Singapore English/Singlish for another example). Additionally, the use of (often rather bizarre) English phrases in Japan is just one aspect of the language's presence there. Obviously, many Japanese are fluent English speakers and there are several English-language institutions where English is used as effectively as anywhere else. What differs is often a matter of vocabulary: for example, police box is always used as the translation for 交番 kouban, but in fact this is a local police station, rather than a callbox specifically for contacting the police, as in Britain (see TARDIS :-) ). This 'fork' of English should also be covered. John Stephenson 01:39, 14 February 2007 (CST)

Words used in English that are used in a different way: as well as the ones in the article (e.g. 'police box'), I've just thought of dormitory (which is used to mean 'hall of residence'). Any more? John Stephenson 00:09, 21 February 2007 (CST)

Another: as a native English speaker I'd never heard of dust box before, but it exists in Japan. This led me to come up with three criteria for a true JE word, as distinct from pseudo-English loanwords used in Japanese:

Another is use of trouble. This is a very common term in Japanese English writing, meaning anything from criminal activity to a slight nuisance. e.g. (university library PC webpage) "Since it causes making some trouble, please do not install any software or change the method." This page also exemplifies the use of the first person imperative: "Let's be sufficient, and take care so that it may not print on other person's paper." John Stephenson 23:17, 8 April 2007 (CDT)

I don't wanna burst in doing edits if this is something that the previous authors have really thought through,but I think we need to make a distinction between transliteration of names -アクセル for Axel-, four character abbreviations -パソコン from パーソナル・コンピューター for personal computer- and true wasei eigo words like クーラー and OL (オフィス・レディー）. Any opinions or objections before I start editing? Axel Theorin 11:38, 18 May 2007 (CDT)

Not at all. Yes, names are just a transliteration, not wasei-eigo. One distinction to be made is between wasei-eigo words whose meaning is not obvious, like salaryman, and wasei-eigo words that appear to mean one thing but are in fact another - like the pasucon example. This was not a PC but a 1980s games console. Also, maybe OL is yet another category - words that are abbreviated to English initials, then pronounced in Japanese. 'Office lady' is often pronounced oeru (OL). John Stephenson 01:51, 19 May 2007 (CDT) 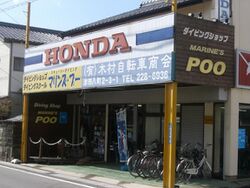 Thanks. By the way, I was thinking of adding an image later illustrating an amusing example of 'Engrish'; there is a shop in my town called 'Poo's Machines'. The exterior is brown as well... do you think such an image would violate CZ's family-friendly policy? John Stephenson 00:15, 3 June 2007 (CDT)

Good question. How about just uploading it so it can get some input? On the same token, I've been wondering about engrish.com as an external link. While teaching English abroad, that site has provided me with hours of much-needed laughter, but I'm sure we'd agree that some pretty strong adult overtones are not restricted to the adult section of the site. I've not looked at the other site yet. Stephen Ewen 02:29, 3 June 2007 (CDT)

LOL, pretty funny. It's certainly not issue enough for me as a constable to worry. I'd say go ahead and put it up with your tactful caption and leave it to editors. By the way, I looked at your flickr page. I was amused by Hope Cigarettes when I taught on Saipan. If these are the same company, they are actually by a Filipino company, where they are even more ironically called "Hope Luxury Cigarettes". They are made by--I kid you not--"The Fortune Tobacco Company", see this. Your other photo here might be a nice addition, too. But like the issue with the Dust Box Core image, wait for the fair use issue to get settled first--besides, this worries me (Says, "the Japanese Act does have a set of detailed provisions specifying fair use in particular circumstances such as reproduction for private use or reproduction in libraries or quotations, but it has never contained a general fair use defense such as in Article 107 of the U.S. Copyright Act. This has caused a lot of difficulties in dealing with copyright cases.") (can you help educate me?). For a lead image for this article, you might think about an image leading to an image gallery of instances of Engrish as a very nice touch to this article, like was done with Biology, Onslow Beach, and Tux (gallery image is not the lead image in the latter instance) Stephen Ewen 05:06, 9 June 2007 (CDT)