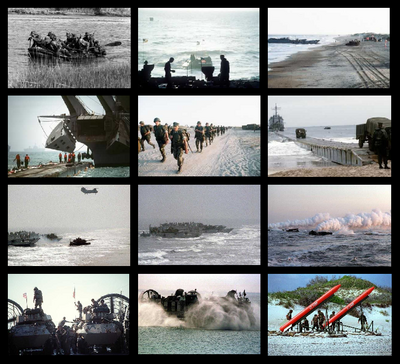 A gallery of images of U.S. Military exercises conducted at Onslow Beach from 1979 to 2006. Click on the image to enter the gallery.

Onslow Beach is an 11-mile (17.7 kilometer) stretch of undeveloped beach located along the Atlantic coast in Onslow County (see map), in southeastern North Carolina. It is primarily used as amphibious training grounds for the Marine Corps Base Camp Lejeune, the premier site for such training on the U.S. east coast, of which the beach is part. The beach additionally supports the recreational needs of the Camp Lejeune community, as well for the surrounding community to the extent possible. It is also home to two endangered species, each sustained by a fragile ecosystem.

Onslow Beach as a military training location began with a search in late 1940 at Marine Corps headquarters. With new requirements for manpower stemming from U.S. interests abroad during World War II, the Corp projected that a "new species" of units and defense battalions would be needed to garrison forward bases. The increased demand for manpower would also mean an increased need for training facilities. A search along the U.S. east coast ensued.

One among several of the chosen sites was Onslow County North Carolina's New River area, which a military World War II historian described as "111,170 acres of water, coastal swamp, and plain, theretofore inhabited largely by sand flies, ticks, chiggers, and snakes." After the United States Congress funded construction for what is now Camp Lejeune on 15 February 1941, it activated less then three months later as a tent camp. Since then, the beach has been used by the U.S. Marines, Navy, and Army for various training exercises, particularly amphibious exercises and landings.[1]

Onslow Beach has been the site of many militarily important training exercises. It helped train men to take Guadalcanal from Japanese control in one of the most hotly contested campaigns that became a turning point in the war.[2] Not every training exercise ended in actual action, of course: A practice invasion of Cuba was conducted on 16 November 1962, 19 days after the end of the Cuban Missile Crisis.[3]

During times when no exercises are being conducted, the beach is popular for fishing, sunbathing, and shell collecting, especially during warmer months. Between Memorial Day and Labor Day, an estimated 2,000 people each weekend visit Onslow Beach.[4]

Camp Lejeune conducts one of the preeminent fish and wildlife management programs within the United States Department of Defense. All wildlife at the beach is carefully managed to allow its continued military usages.[5] Three endangered species, two animal and one plant, reside at Onslow Beach.

The first known instance of successful nesting of a Green Sea Turtle (Chelonia mydas) north of Florida occurred in 1980 at the beach. The specimen deposited 819 eggs in five nests. Tagged, she returned to the same stretch of the beach five years later to deposit 893 eggs, again in five nests.[6] Today sea turtles, especially Loggerhead Sea Turtles (Caretta caretta), are known to habitually nest at the beach. During their nesting season, from May through October, sea turtle eggs are daily collected from a one-mile stretch of the beach and placed in an incubator, and the turtles released after hatching.[7] Many other nests elsewhere on the beach are cordoned off to allow the hatchlings to incubate and emerge naturally.

As with most beaches that support important human and wildlife activity, restoration efforts to counter natural erosion are an ongoing effort. In September 2005, Hurricane Ophelia took an especial toll, not only causing significant erosion but nearly destroying the beach's historic Riseley Pier.