thanks, Versuri. Yes, we would like to see many more images of cats! Nancy Sculerati MD

I have begun putting in external links to some breeds in the text. These will each go to a cat fancier organization. It is important, on balance, that the links do not all go to any one of the organizations, but represent them all properly. Nancy Sculerati MD 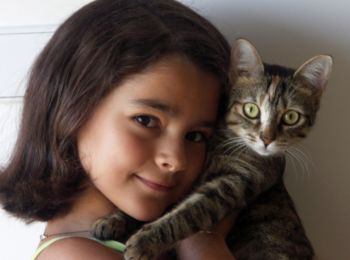 Cats are often quite selective in their affections

What is the point of this photo with respect to the article? It seems to be pretty random since the section it is placed does not discuss affection. Also, it appears that the cat is NOT being affectionate here. Rather, it looks startled and ready to bolt. Chris Day (Talk) 17:04, 19 December 2006 (CST)

The final layout of the article is no where near complete. The look of the cat is the point! Can you comment/add on the text? Nancy Sculerati MD

Frankly, I think it was probably being affectionate with the girl, but objects to the photographer and would like to escape! I just came up with that caption quickly, and am open to change it. I love the picture and want to use it - somewhere in the article, anyway. There are some pictures below along the side that were uploaded for me, and I'd like to use them too.I know I would like to have a short section on development, that will use the small kittens, and the exotic shorthair is good for breeds or body type. If you are interested in cats, could you check into the biology aspect of the features? Or anything else? It would be good to work with someone! Nancy Sculerati MD

Title of this article

I wonder if this should live at domestic cat? I'm wondering where the article will live that concerns lions and tigers as well as puddy tats. --Larry Sanger 21:36, 25 March 2007 (CDT)

Thanks, Larry - because we are arriving at naming conventions, though (as with so many things) we are not there yet. As per discussion on the forums, we are hoping to use scientific names, with -for example, articles like Cat, the plain word Cat or Domestic Cat the mosty obvious thing on the title. So it should live at -for now- Felis Silvestrus catus (Domestic Cat), unless you can think of something better. Can you move it for me, please? I'll check the searches to see if it comes up for various terms people would use for cat. If this works, Dog is next. Nancy Sculerati 11:10, 30 March 2007 (CDT)

Well, I think you, or someone, should craft policy proposals on which the Biology Workgroup editors can be called upon to vote, before we start implementing what we presume will be the policy. --Larry Sanger 11:54, 30 March 2007 (CDT)

OK-so we'll leave the title as is, for now. Chris Day has accepted the charge of putting together (with others) a proposal which can then be vetted by the Biology editors. It will take some time, and will be the sort of thing that will have to be updated periodically, but I think we'll get there reasonably soon. Nancy Sculerati 12:22, 30 March 2007 (CDT)

Those pictures of different types of cats near the end of the article...is there a way to align the images so that they appear next to the paragraphs they're illustrating? India Williams 00:08, 13 April 2007 (CDT)

A couple of things to do

under the Hygiene section: No matter how well used a scratching post might be to some cats, that are individuals who are not . I have no idea what this was intended to say. Can someone who has been working on this for a while make sense of it?

In the Varieties of domestic cats section there are many pictures. As was stated above, these should be aligned in some way. I suggest either anchoring them to relevant sections or using <gallery> tags. Also, why is it that the deleted pictures have captions but the extant ones have either nothing or xxxx? Connor Lee 14:13, 19 May 2007 (CDT)

The nonesense sentence was fixed. The article is unfinished. The xxx was a co-authors code for showing me where the captions could be put when he helped upload and format these pictures. If there are captions to pictures that do not exist, these may have been left -and not yet deleted, from the Wikipedia article that this article originally revised. If you are interested in cats, pleas feel free to add text to this article and help author.The photographs at the bottom have not yet been used, but have public domain or other useable copyrights and are there for future use. If a picture has been used but is not next to its paragraph, please help and move it. If you do not know how to change the code to properly align it, then please let it be. When more text is added it may fix itself. Nancy Sculerati 14:37, 19 May 2007 (CDT)

Thanks for clarifying about the images. I was confused since above it says basic clean up has been done. Connor Lee 15:27, 19 May 2007 (CDT)

The tone and style of the opening sentences don't seem very "encyclopediac" to me. I'm too new here to be thoroughly familiar with what is or is not appropriate for CZ and I've read the warnings about falling into Wiki jargon. I don't think these sentences can be called "biased", at least not as most people use that word, but they certainly would fall within Wikipedian POV if such a term were allowed here. In any case, the tone seems to me to be more appropriate for a chatty, informal article in, say, a newspaper. I say this as a cat person myself -- in fact, the picture of me in Wikipedia at has my own cat ("The Beast" or "Leoneta") on my lap.... (I think I'll insert that photo on my user page here....) Hayford Peirce 15:43, 19 May 2007 (CDT)

We are not Wikipedia and that's not a problem. Why don't you add more to the article? It could use a new co-author. I would suggest that you add new things and we can edit it all together as time goes on. Nancy Sculerati 16:14, 19 May 2007 (CDT)

What are the chances we can stop copying articles directly from WP and simply fixing them up? I'd think that on popular, generic categories such as these that we could create our own that are better, and less segmented than WPs. I've been noticing a huge trend on this lately. It would be one thing if this was written solely by an author that signed up here and imported their article, but that's not the case.--Robert W King 12:49, 6 June 2007 (CDT)

Granted, I could be wrong about this article, but immediate inspection shows that it's not too much different. --Robert W King 12:51, 6 June 2007 (CDT)

I'm not sure I agree that the term is rarely used. We, perhaps, take it to extremes, using it to refer to the entire cat-majority household; the four dogs probably think they are cats, the late squirrel thought he was a cat, and further deponent sayeth not about the humans. Nevertheless, I have heard it used not all that infrequently in multi-cat households. Howard C. Berkowitz 10:35, 2 February 2009 (UTC)

Tom, I think you need to rephrase a little - it sounds as if infantile helplessness is greater than it actually is. Ro Thorpe 17:44, 22 April 2010 (UTC)

I did tell Mr. Clark that I was proud of him for trusting me at the vet, not needing the carrier. *sigh* we still have battles to squirt drugs into his mouth; I just wish the vets would give me an injectable form which would be easier on everything. Mr. Clark has trained me now to mix some of his drugs into chopped liver, which he previously loved au naturel but now prefers his pate spread onto little crunchy cat treats. Tomorrow, it's off again to Tufts University Veterinary School for advanced diagnosis and treatment.

Being reasonably fluent in cat body language, I interpret the look on the cat above as "oh, (expression violating family friendliness)".