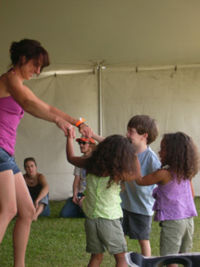 The Stingaree Music Festival is an annual music festival held in Cystal Beach, Texas started by Hayes Carll to "bring the music he loves to a place that he loves". The musical styles at the festival include Americana and folk music, country-rock and outlaw-country music and the performers are well-known musicians as well as up-and-coming younger musicians. Although many of the musicians come from the Austin and Houston, Texas areas, performers come from as far away as Alabama, Arkansas, Oklahoma, Nashville, and even a few (Romi Mayes, Scott Nolan) from Winnepeg, Canada.

Crystal Beach, Texas is one of the few remaining beach communities that has not been swamped by strip malls, fast food restaurants and high rise condominiums. It is a very small town that has many beach houses available to rent for tourists. It is a few miles, and a short ferry ride, from Galveston, Texas and about an hour or so from Houston, Texas.

The 2008 festival, from April 18-20, was blessed with beautiful weather throughout the event with temperatures in the high seventies to low eighties and fair skies, with a full moon, throughout the three day festival. This contrasts greatly from the very bad weather of the inaugeral event in 2007. The event was held at the Tiki Beach Bar & Grill in Crystal Beach. Some of the featured evening acts included Hayes Carll, the event's creator and Ray Wylie Hubbard of Up Against the Wall Redneck Mother fame, the Stone Coyotes and the Magpies. An Austin, Texas band sure to make national fame, the Band of Heathens, rocked the house early on Saturday afternoon.