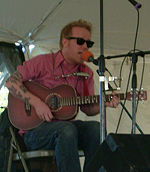 Scott Nolan is a singer-songwriter based out of Winnepeg, Canada. His latest album, Receiver/Reflector was produced by famed Texas-based producer Gurf Morlix, whom he had met during Romi Mayes recording sessions. His previous album, his second, was titled No Bourbon & Bad Radio and his debut album was titled American Hotel. He tours and performs with drummer Joanna Miller, and they played at the 2008 Stingaree Music Festival, among other stops in the United States.