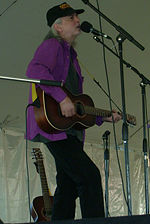 Gurf Morlix[1] is a musician and music producer who first gained national fame for producing and playing with Lucinda Williams for eleven years. He produced her critically acclaimed albums Lucinda Williams and Sweet Old World. He plays just about any instrument and has worked with an impressive array of musicians, including Warren Zevon, Robert Earl Keen, Jerry Lee Lewis, Lucinda Williams, Ray Wylie Hubbard, Blaze Foley, Steve Earl and so many more. He has released four solo albums: Toad Of Titicaca, Fishin' In The Muddy, Cut 'n Shoot, and Diamonds to Dust and is a member of the Buffalo Music Hall of Fame, and the Austin Music Awards Hall of Fame. Diamonds To Dust reached the #2 spot on the Americana Chart Top 40.