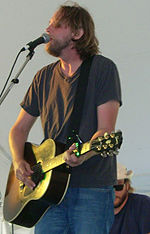 Hayes Carll is a folk/country/Americana singer originating from Crystal Beach, Texas, on Bolivar Peninsula (near Galveston). His first album, Flowers and Liquor, received rave reviews both nationally and internationally. His sophomore album, Little Rock, also received good reviews. He is often compared to other great Texas singer-song writers like Townes Van Zandt, Lyle Lovett and Ray Wylie Hubbard. He currently tours the US and Europe spreading that Texas American sound, but on occasion still makes time to play in Austin, Houston and Galveston to packed houses. He is known for his disheveled, just-got-out-of-bed appearance on stage, a downtrodden gait, and a quiet disposition.

Hayes was "discovered" by Rex Bell at the Old Quarter Acoustic Cafe in Galveston, Texas, where Hayes first started playing at open mikes. It was here that he met Charlie, a mandolin player, and a lead guitar player, Gary Regan, the My Texas Music Guitar Player of the Year in 1999. After several years, he started opening for the Sisters Morales and this exposure greatly aided his career and led to recording his first album.

This album is mostly about Hayes' alcohol-fueled youth and contains a mix of funny, cheerful songs, like "Naked Checkers" and "Flowers and Liquor", as well as more thought provocating songs about things such as a man in prison making licence plates that read "Live Free or Die." Highway 87, about picking up girls and "pissing off the local boys, and your back's against the sea," is one of his most touted songs.

Little Rock is about Hayes' life today, with songs co-written with the likes of Guy Clark.